a a a
skip to main content
akronchildrens.org
Home > Inside Blog > Donor Features > Hudson High grad’s generous spirit earns her a spot in Charity Ball 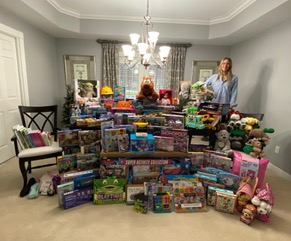 Ainsley Blue, a graduate of Hudson High School, has been conducting an annual holiday toy drive for Akron Children’s since she was 8 years old.

When Ainsley Blue was just 4.5 years old, she remembers being in the burn unit at Akron Children’s Hospital with her little brother, Preston, who had suffered a burn on his hand.

“The memory really stuck with me even though I was so young,” she said. “My brother was crying and upset, and I remember someone giving him a toy to distract him. It helped him calm down and I thought that was a really nice thing to do.”

That memory became the inspiration for an annual holiday toy drive Ainsley began doing at the age of 8 with the help of her neighbors.

“We started out small the first few years, donating just a few toys,” she said. “Eventually my goal was to have a toy for every child who had to be hospitalized over Christmas.”

Each year, Ainsley puts a flier in the mailboxes of her neighbors in Hudson, OH, and also uses her neighborhood’s Facebook page to help spread the word. Through the years, the toy drive has grown from coloring books and games to Barbies and dollhouses. In 2020, during the height of the COVID-19 pandemic, she surpassed her goal by donating a record 283 toys as well as monetary donations. 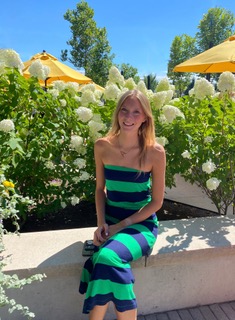 Ainsley is currently studying at the Ohio State University where she is majoring in business administration with specializations in marketing and finance and minoring in art history.

“The toy drive may have originally been my idea, but its success wouldn’t be possible without the generosity of my family, friends and neighbors. It’s a group effort,” she said.

It was that spirit of generosity and service to the hospital that contributed to Ainsley being invited to participate as a debutante in this year’s Akron Children’s Hospital Charity Ball, a cotillon fundraiser hosted by the hospital’s Women’s Board.

“I am the first person in my family to ever participate in Charity Ball,” she said.

A 2021 graduate of Hudson High School, Ainsley, age 19, now attends the Ohio State University where she is majoring in business administration with specializations in marketing and finance and minoring in art history. Originally slated to participate in Charity Ball in 2020, COVID derailed those plans. 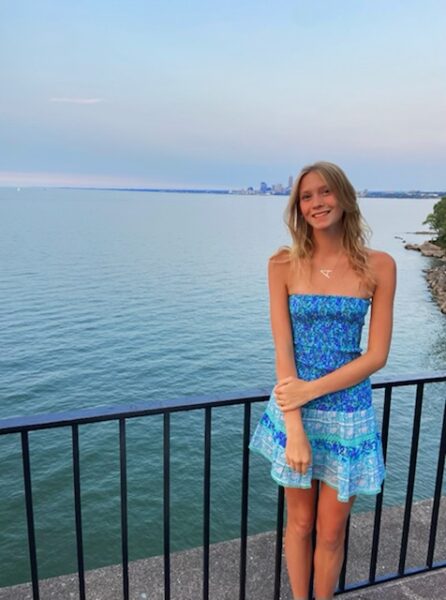 Ainsley’s goal each year is to provide one toy for every child who is hospitalized on Christmas.

While home on holiday break, Ainsley also recently attended the Kandy Kane Gala in Cleveland, a mission driven gala and holiday toy drive. Historically the event has been held in Chicago for the past 2 decades, but this year it was relocated to Cleveland.

“This is a very big, successful event and I wanted to attend so I can get some ideas of how I can grow my toy drive further,” she said.

“My parents did a great job teaching me about the importance of giving back to my community,” she added. “No matter where I land, I know I will always try to find a way to give back.”