a a a
skip to main content
akronchildrens.org
Home > Inside Blog > Retirement > Mary Marino plans a retirement that includes family, travel and projects

Mary Marino, director of rehabilitative services, has always focused on the big picture. Early in her career, she worked as a speech-language pathologist, coming up with ideas and solutions to help her pediatric patients overcome seemingly insurmountable obstacles. Later, looking at the big picture meant joining a team that helped to streamline Akron Children’s separate rehab departments into one core group that addressed patients’ needs through an interdisciplinary approach.

It’s been a highlight of Mary’s career to know she was able to increase the scope and reach of Children’s rehabilitative services.

“It’s a great feeling to walk down the hallways and see the miracles happening every day in the rehab area,” Mary said. “We have been able to facilitate more children getting access to care and a greater number of programs being offered.”

After 43 years at Children’s, Mary retires on December 31. She looks forward to enjoying time with her family, focusing on her health, doing house projects and traveling to the beach. Not one to sit still for long, Mary also plans to work part-time in private practice as a speech therapist. 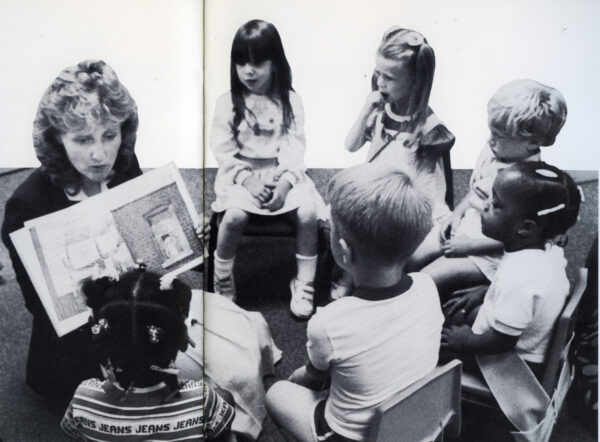 Mary Marino, who started as a speech-language pathologist at Akron Children’s in 1978, reads to a group of children during speech therapy.

What brought you to Children’s?
Originally from Akron, I attended University of Akron, earning undergraduate and graduate degrees in speech-language pathology. During grad school, I completed 2 internships at Children’s. I found that I liked Children’s culture and acute- care setting, which is fast-paced and allowed me to make judgment calls on kids’ treatment plans.

After graduation, I worked with pediatric patients, holding jobs in Warren and Columbus, Ohio. I grew up as the oldest of 7 children, so I came home often to visit my family and friends. I decided to return home and was hired by Children’s. Soon after, I became engaged to Nick, my husband of 42 years.

Have you always worked in the same department and role?
Initially, I worked as a speech-language pathologist, eventually becoming the speech pathology manager. In 1999, I took a newly created position as rehabilitative services director. This was at a time when we were analyzing conditions that contributed to the declining profitability of the rehab area and making recommendations for improvement. Prior to 2000, physical therapy, occupational therapy, speech-language and audiology operated as 4 separate departments with 33 employees who primarily served inpatients. By developing a more integrated system of delivery that grew rehab services beyond our walls, the department has grown to over 250 employees with a patient mix that now includes a large outpatient base. 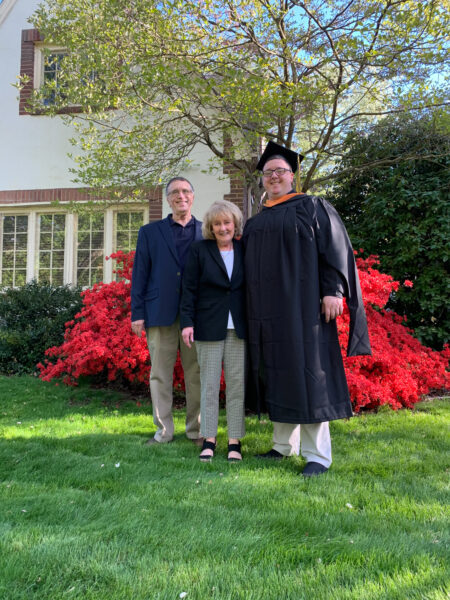 Mary Marino and her husband, Nick, are shown with their son, Nick Marino, a staff nurse in Akron Children’s pediatric intensive care unit. In May 2021, Nick graduated from the University of Akron with his master’s degree as a pediatric acute care nurse practitioner.

What have your biggest contributions been while here?
It’s the way we’ve built the continuum of rehabilitative care for our patients, enabling them to get acute care when they first come to the hospital before transferring to our inpatient rehabilitation unit when they’re medically stable. If they continue to need intensive therapy after discharge, we offer a day rehabilitation program or outpatient therapy at one of our 12 regional sites.

The opening of the inpatient rehabilitation unit in 2013 was an especially happy moment for me. It was heartbreaking to treat children for an acute illness, surgery or trauma, then transfer them to another hospital for inpatient rehab. The child and their family had already been through so much. Now, patients can stay here and stay close to home.

How has Akron Children’s changed since you started here?
For me, it’s what has not changed. Our culture remains so rich, and our people have one common bond: working together to keep children healthy and ensure they’re thriving. The many dedicated people working here make amazing things happen for our patients and families.

With so many little children here, did someone or something especially touch your heart?
I’ve had so many heart-warming moments. For example, when a child hears his mom’s voice for the first time, says his first words either verbally or with a communication device or takes his first steps. The kids make wonderful progress and have positive attitudes. And their parents are appreciative of everything we do for them. 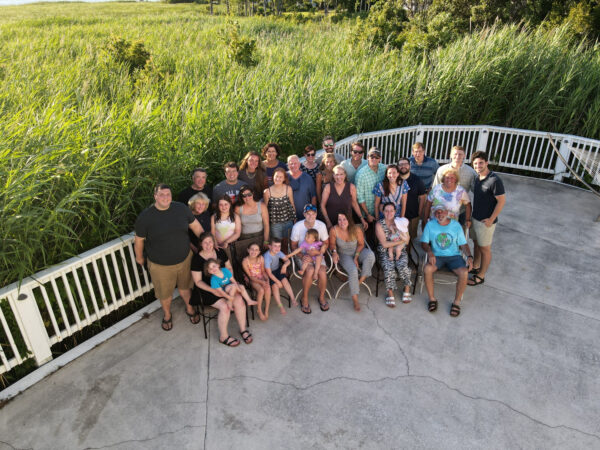 What’s your idea of a perfect day?
Seeing the sunrise while walking along the beach in the morning, watching my 5 grandchildren jump in ocean waves all day, and later, enjoying dinner with my husband, sons and daughters-in-law.

What music do you like? Where and how do you listen to it?
My husband is a musician. I’m exposed to many forms of music and love most types. Music is good for my soul!

Akron Children’s offers free tuition, other benefits to those pursuing associate degree in nursing
Pediatrician Dr. Maria Komer is thrilled to treat kids and families in her hometown
Akron Children’s named as a Best-in-State Employer by Forbes
It’s all about the smiles, giggles for new pediatrician Dr. Megan Hawes
Sharing heritage and hope through Ukrainian Easter eggs