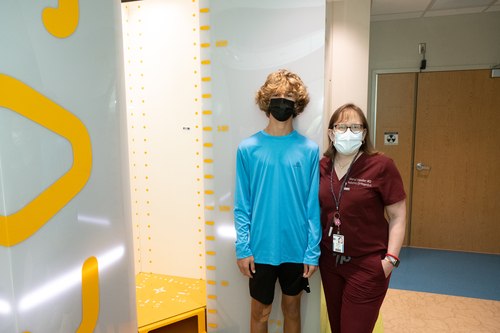 Stanley Magielski, age 15, understands where the term growing pains comes from. After growing 7” when he was 13 years old, it became apparent that his knees were bowing inwards causing him to become severely knock kneed.

No stranger to doctors (Stanley has broken his foot 4 times!), Stanley’s mom, Melissa, asked his podiatrist about his knees.

“We tried insoles, but they didn’t make much of a difference, so we decided to seek out a second opinion,” she said.

“Upon seeing Stanley, it was clear he had a significant deformity,” said Dr. Handler. “He was a perfect candidate for guided growth surgery which uses a small metal plate and screws to direct future bone growth.”

Dr. Handler says accurately timing the surgery is imperative to its success.

“You have to do the surgery when the child is still growing for at least a year, so that you have enough time to get the needed deformity correction,” she said. 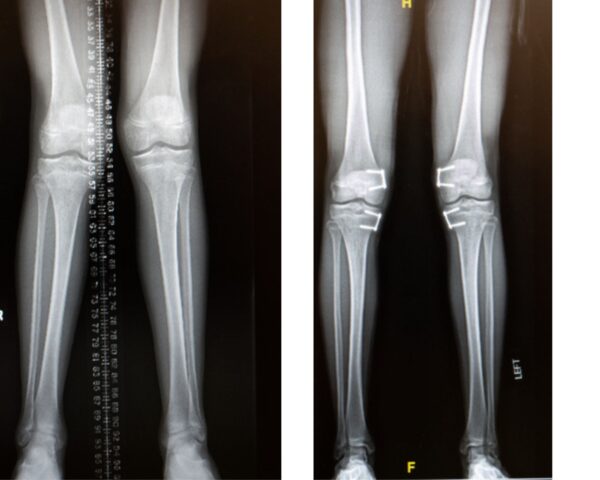 Stanley’s before (on the left) and after having guided growth surgery (on the right) images of his knees.

Already 13 years old, time was of the essence in Stanley’ case. In preparing for surgery, Dr. Handler used EOS imaging which captures X-ray images using significantly lower doses of radiation. Akron Children’s offers this technology at both its Akron and Beeghly campuses.

“The amount of radiation that kids with orthopedic conditions are exposed to can add up over time, so reducing radiation dose is particularly beneficial for children requiring frequent imaging,” said Dr. Handler.

In addition to imaging spine disorders, EOS can also be used to get 2D and 3D images of the whole leg or shoulders, such as to evaluate a leg length discrepancy or limb deformity. 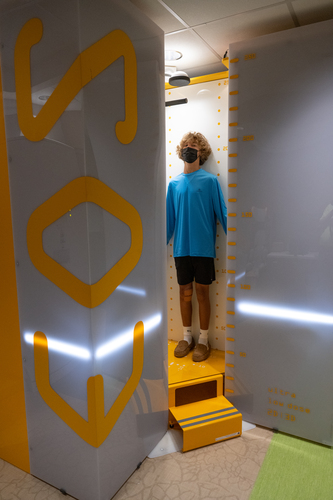 Stanley found the EOS imaging machine more comfortable than traditional X-rays which required him to lie down.

“I liked the EOS machine because it was more comfortable than having to lie down,” said Stanley of the technology that made his frequent X-rays easier and more comfortable.

Dr. Handler even used the technology to help her with surgical planning.

“I use X-rays to measure the tibia and femur to help me determine where to put the plates so I can get the proper correction,” she said. “The nice thing about guided growth surgery is that it doesn’t injure the growth plate because the screws are placed above and below it, not across it.”

In Aug. 2021, Stanley had outpatient surgery to insert 2 plates and 4 screws in each leg – slowing down the growth on the inside of the bone so the outside would grow more causing the legs to straighten out. By Sept. 2022, Stanley’s right leg had corrected to the point he needed to have the hardware removed.

“Once you achieve deformity correction, it’s important to take the plates out if the patient is still growing to avoid overcorrection causing the leg to bow out the opposite direction, such as from knock knees to bow legs,” said Dr. Handler. “However, if the deformity is corrected and the patient is done growing, the hardware can be left in as long as it isn’t bothering them.” 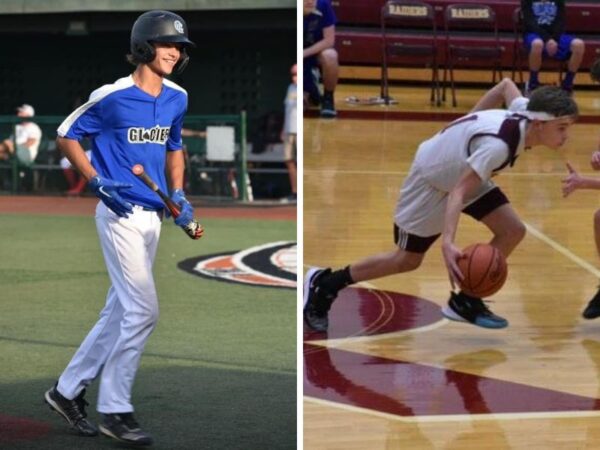 Stanley is looking forward to returning to baseball and basketball at South Range High School once his broken foot heals.

Left untreated, Stanley’s condition likely would have led to future knee, hip and back pain as well as osteoarthritis in his knee joints. Now standing straighter, Stanley also has some hardware to show his friends.

“Dr. Handler gave him the plates and screws she took out of right leg as a keepsake,” said Melissa. “She was great. She took her time with us and allowed me to ask her tons of questions. I appreciated her patience.”

More than a year post surgery, Stanley has no restrictions but recently broke his foot (again!) and will have to wait a little longer to resume his school sports at South Range High School. In March, he will return to Dr. Handler for evaluation of the correction of his left leg and determine if the hardware needs to be removed on that side too.

Why You Need to Turn in Unused Drugs, Where to Take Them
Is the COVID-19 vaccine the answer to getting back to normalcy?
Living with cystic fibrosis just part of life for 17-year-old
Dr. Kristi Bogan finds success in her new role as pediatric interventional radiologist
Why vitamins don't replace healthy foods