a a a
skip to main content
akronchildrens.org
Home > Inside Blog > Employee Features > From patient to volunteer to employee, Richard’s journey at Akron Children’s comes full circle 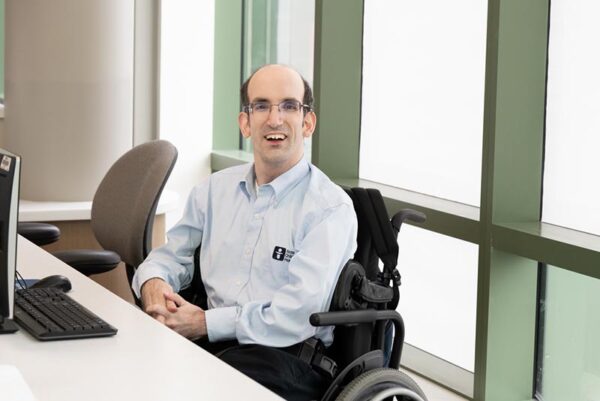 Richard Redmond is a guest attendant in Volunteer Services at Akron Children’s.

As a guest attendant in Volunteer Services, Richard welcomes patients and families to the hospital and helps them find their way.

Born with cerebral palsy (CP), a congenital disorder that affects a person’s ability to move and maintain balance and posture, Richard spent more than 2 months in the Akron Children’s neonatal intensive care unit and received years of follow-up care at the hospital to help manage his condition.

In 2008, he joined the hospital as an information desk volunteer, completing a remarkable 3,000 hours of service. In 2014, his journey with the hospital came full circle when he was hired as an employee.

“It all just fits together,” he said. “I really love my job. I’ve been here for 14 years, and I don’t think I’ll ever leave. As long as my health holds up, I’m going to continue working. Now, my biggest goal for myself is to go from part time to full time.”

Richard’s love for his work shines through in his daily interactions with patient families, and he has a reputation for being the go-to guy for hospital wayfinding.

“I enjoy that I’m able to be of service to others,” he said. “What makes me feel really good is that because I use public transportation (Metro SCAT), there have been numerous instances where someone on board the bus has an appointment here at the hospital. If the bus operator is someone who knows me, they’ll say, ‘Ok, Richard, do your thing.’”

Richard says he can walk with some assistance, but primarily, he rotates between a manual and motorized wheelchair. Living with CP, he’s an advocate for improving accessibility and inclusion for all abilities inside and outside of the hospital.

“My big thing is with the desks,” he said. “If you want a quality person like myself to work for you, you need to have desks that are wheelchair accessible. When I first started volunteering, I worked a desk where the drawers came to my knees. Now, we have rebuilt, and the desk is fully wheelchair accessible.”

October is National Disability Employment Awareness Month, a time to recognize and celebrate the talents and capabilities of individuals with disabilities in the workforce. Richard says it’s a month that means a lot to him.

“As a country, we’re trying to make people aware that people with disabilities can be in the workforce and in all honesty be part of our community – that someone in my situation can actually do something,” he said.

Richard stays busy outside of the hospital by serving as a reader and secretary for the men’s group of his church. He says it’s important to never assume what someone with a disability is capable of.

“People need to cut back on all the assumptions they make,” he said. “When you see someone in a wheelchair, don’t automatically think they can’t do anything. That’s what a lot of people do, and I can’t tell you how many times I’ve told people that looks can be deceiving.”