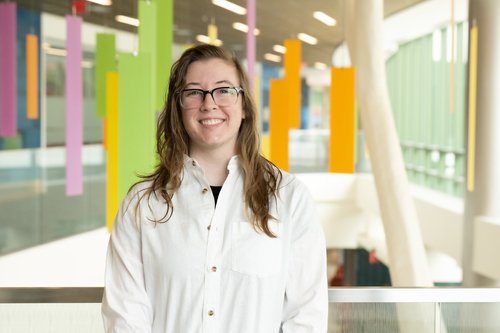 For Stephanie Ogden, clinical coordinator of the inpatient behavioral health unit in Akron, and Sara Zingaro, staff nurse in the partial hospitalization (PHP) and intensive outpatient program in the Mahoning Valley, caring for kids in crisis is a calling.

“I fell in love with adolescent behavioral health after my mental health rotation in nursing school,” said Stephanie, who has worked at Akron Children’s since 2019. “This age group is special because what we teach them now can set them up for success for the rest of their lives.”

For Sara it was a professor she had in nursing school who solidified her love for psychology.

“She was an amazing teacher and she kept me wanting to learn more about the subject,” she said.

As the only RN in the Mahoning Valley PHP and outpatient program, Sara works with the behavioral health team to provide care in the least restrictive environment possible so patients can resume their normal routine as soon as it’s safe. The hospital’s PHP and intensive outpatient programs, which are offered in Akron and the Mahoning Valley, allow teens to benefit from consistent psychiatric treatment to stabilize their mental health and still live at home. In 2023, the hospital plans to open 2 new standalone behavioral health sites in Canton and Mansfield.

“The population of kids we see in PHP ranges from 12-18 years old. They’re treated mainly for depression and anxiety, but they may have additional diagnoses as well as suicidal thoughts,” said Sara. “The outpatient population has a larger range of ages, and in addition to anxiety and depression patients may also have attention deficit hyperactivity disorder (ADHD), post-traumatic stress disorder (PTSD) and obsessive-compulsive disorder to name a few.”

Stephanie’s work as a clinical coordinator on the inpatient behavioral health unit on the Akron campus also has her caring for a diverse population of patients ranging in age from 5-17. 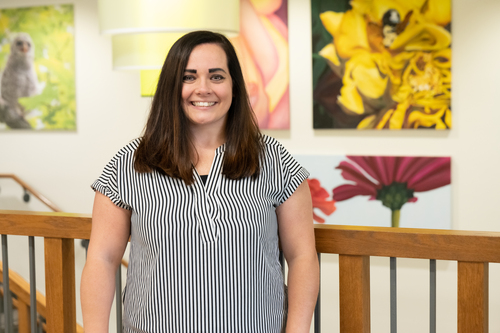 “Our kids struggle with depression, anxiety, psychosis, substance abuse, eating disorders, ADHD, oppositional defiant disorder, personality disorders and extensive trauma histories,” said Stephanie. “We also work with a high volume of teens who are a part of the LGBTQ+ community.”

While some people may find working with this population challenging, Stephanie sees the rewards

“I enjoy sitting down with a patient one-on-one to reach beyond a surface level conversation or a task-related mindset,” she said. “It’s rewarding to watch a child come in unwilling to open up to you, but as you spend time with them and listen, those barriers begin to crumble, and you see the early stages of healing.”

Both women feel like they are making an impact.

“Nurses are the main line of communication between parents and providers. We’re usually the first to know what’s going on with a patient, the first to listen to the parent/guardian, and the first to offer support,” said Sara. “I’ve had families thank me for just listening. It’s nice to know I’m helping the patients while also providing families some form of comfort.”

“A human being just needs to know they are heard, seen, important and cared for,” said Stephanie. “As a coordinator, I’m able to do that with our patients, families, nurses and mental health techs. I view our unit in a different light and can encourage and advocate for more than just our patients.”

The Teegan Kamzelski Building where Sara works in the Mahoning Valley is named after a young man from the area who died by suicide. At the dedication of the building in 2021, Teegan’s dad, Christopher Thompson, said, “If we could get treatment for children at a younger age, we could change the pathways of these kids’ lives. The behavioral health program is so important to us and needs support because no one is immune to this disease.”

Research shows 46% of people who die by suicide had a known mental health condition. Suicide remains the second leading cause of death among all young people, ages 10-24, in the U.S. 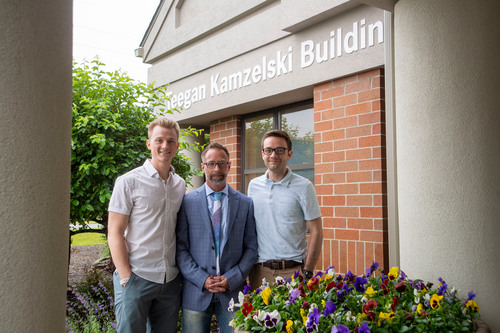 The building in the Mahoning Valley that houses behavioral health services is named after Teegan Kamzelski who died by suicide. Teegan’s father, Christopher, and his half-brothers Alex and Kyle are pictured here at the dedication of the building in 2021.

Akron Children’s has taken extra efforts to identify mental health issues early by embedding behavioral health professionals in its pediatric provider offices and routinely screen patients to help find solutions before there’s a crisis. The hospital also offers a Psychiatric Intake Response Center (PIRC) in its emergency departments to evaluate children and adolescents in immediate crisis. Services include professional assessment and recommendations for next steps of care.

“September is Suicide Prevention Month and it’s important to raise awareness. If more people were educated on the signs/symptoms of someone with suicidal behaviors we may be able to prevent more deaths,” said Sara.

“Unfortunately, there’s still a stigma around mental health. It’s sad because it makes people feel like they can’t speak up when they’re feeling a certain way or having thoughts of wanting to hurt themselves,” she added.

In addition to the work being done at Akron Children’s, there are several other organizations helping to encourage understanding of mental illness. A few worth mentioning are:

For more information on suicide prevention and education, visit akronchildrens.org.