a a a
skip to main content
akronchildrens.org
Home > Inside Blog > Patient Stories > Cancer journey helps 19-year-old rediscover his love of learning 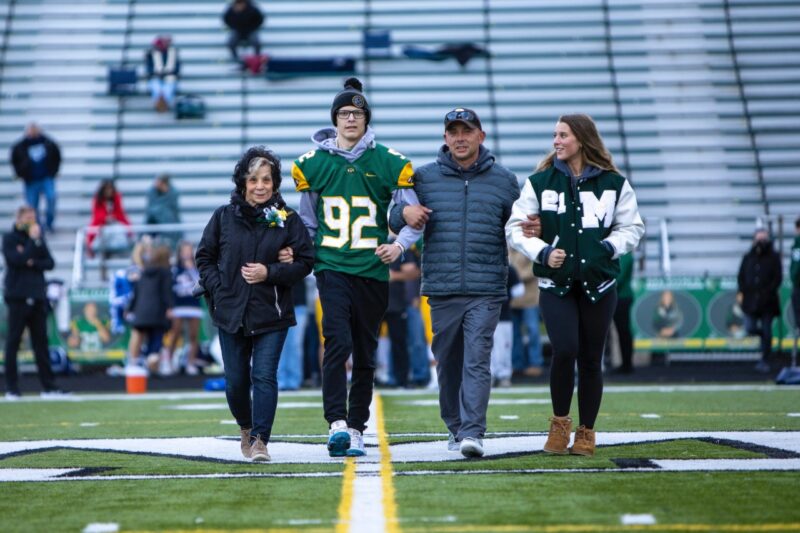 Valentine’s Day 2020 is forever etched into Chad Bigley’s mind and not for the reason one might expect. Instead of spending the day with his high school girlfriend, Chad, age 17, was sitting with his family in orthopedic oncologist Dr. Scott Weiner’s office where he had just been officially diagnosed with osteosarcoma (the most common cancerous bone tumor among children, adolescents and young adults).

Chad first began experiencing signs that something was amiss 6 months earlier when his leg would become swollen and painful. Eventually the pain became too great, and Chad visited a local emergency department where he was told he likely had cancer.

“Dr. Weiner laid out my treatment plan. He asked for a year of my life and said he would make me better,” says Chad.

The treatment plan included 7 months of grueling chemotherapy, as well as the surgical removal of the tumor.

“Chemo was a big adjustment, and it made me really sick,” says Chad. “I spent a lot of time in the hospital.”

Stephanie Savelli, MD, Chad’s hematologist oncologist in the Showers Family Center for Childhood Cancer and Blood Disorders, says, “Chad never indulged in self-pity, he just did what needed to be done to get through chemotherapy and to get well.”

Going through treatment at the height of COVID restrictions meant Chad spent a lot of time in his room leading him to become close with his caregivers, especially Dr. Savelli and pediatric oncology fellow, Dr. Nicholas Farris. 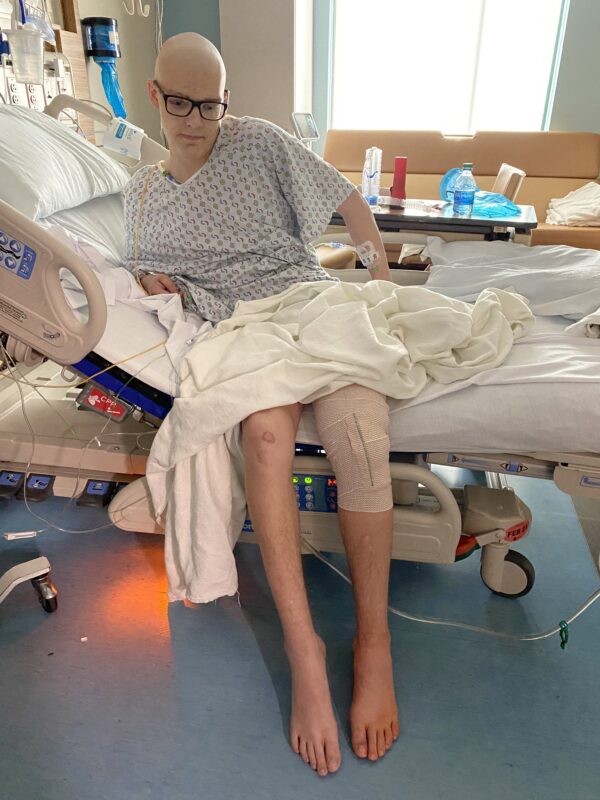 Chad says recovery from his surgery and knee replacement was tough, but hard work in physical therapy has paid off. He has full range of motion in his knee.

“​I always had a soft spot for Chad,” says Dr. Savelli. “In addition to being his doctor, I spent time with him just talking about regular daily life. I tried to keep him focused on the future.”

In May, Chad faced another hurdle when he had 1 foot of his femur removed and replaced with a prosthetic, in addition to a total knee replacement.

“I couldn’t bend or move the way I was used to,” he says. “I was pretty immobile most of the first month because it was stiff and painful to bend my knee or stand.”

“Chad worked very hard on his physical therapy after surgery which we had stressed was very important,” says Dr. Savelli. “As a result, he has almost full range of motion of his knee.”

On Sept. 16, Chad rang the bell in the Showers Cancer in celebration of his cancer treatments ending.

Prior to his cancer diagnosis, Chad’s mom moved out of the Medina school district and Chad had stopped attending school. 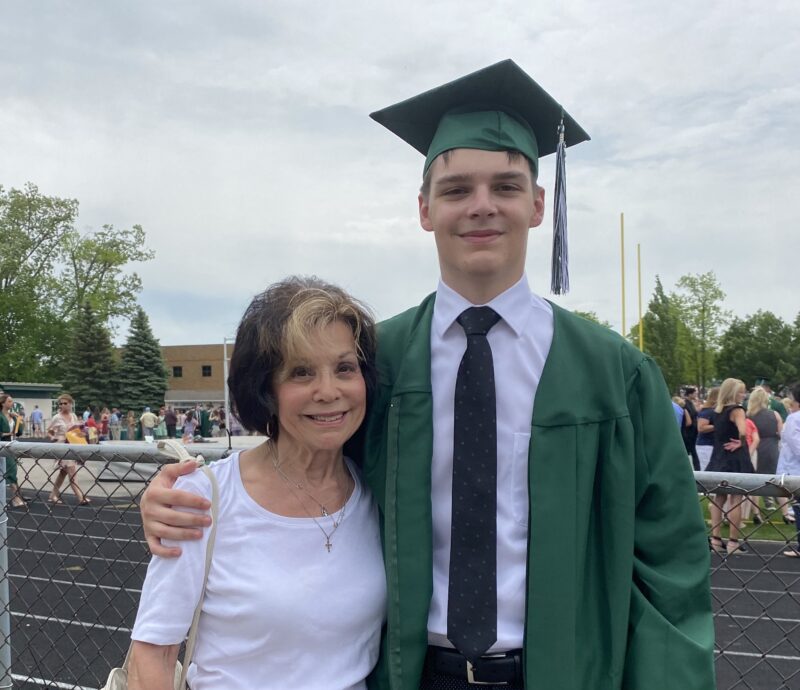 Chad, and his grandmother, Joanne, at his graduation ceremony at Medina High School in May 2021.

“I didn’t take school seriously back then,” he says. “But now my whole life had changed. I was 18 years old, on my own and trying to figure out what I was going to do with the rest of my life. In a way, cancer was a blessing because I became an adult.”

Chad says cancer helped bring his priorities into focus. And No. 1 was completing his education.

“I was able to work out a plan with my high school counselors and attend online school in the Medina district which allowed me to graduate in May 2021 with my classmates,” he says.

Now a freshman at Youngstown State University, Chad lives on campus and is majoring in business.

“When I was going through chemo, I used to think I wanted to pursue law,” he says. “But I got interested in the stock market and politics, and business began to speak to me.”

During his first year of remission, Chad returned to Akron Children’s every 3 months for scans. Now, he goes every 6 months. After 2 years he is eligible to join the Childhood Cancer Survivorship Program which is designed to monitor the late effects of cancer treatments and educate patients about the importance of medical follow up and social support.

​“I explain the survivorship program to patients as a switching of gears,” says Dr. Savelli. “While we’re still monitoring for disease recurrence, that becomes less likely as time passes so we focus our attention on the potential effects that can occur later in life as a result of cancer treatment.” 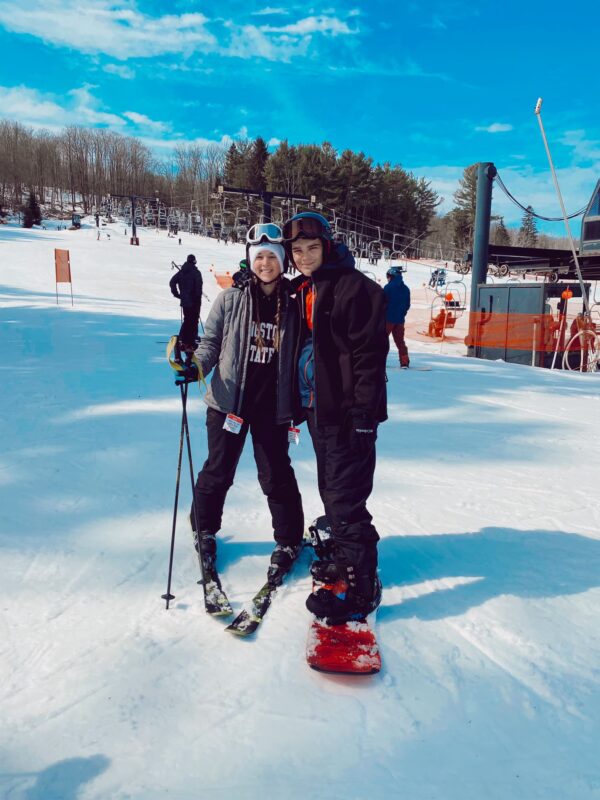 Chad Bigley and his girlfriend, Regan, who was by his side throughout his cancer journey, enjoy some skiing and snowboarding during winter 2022.

Dr. Savelli says the ultimate goal is to help patients become educated self-advocates. This includes teaching them about how their lifestyle choices (smoking, poor dietary choices, lack of exercise, alcohol, etc.) can contribute to poor outcomes later in life.

“When it’s time for them to transition to the adult health care world, they will have the knowledge and tools to navigate that system and be in charge of their own personal health,” she says.