a a a
skip to main content
akronchildrens.org
Home > Inside Blog > Patient Stories > They ‘graduated’ cancer and are now graduating high school 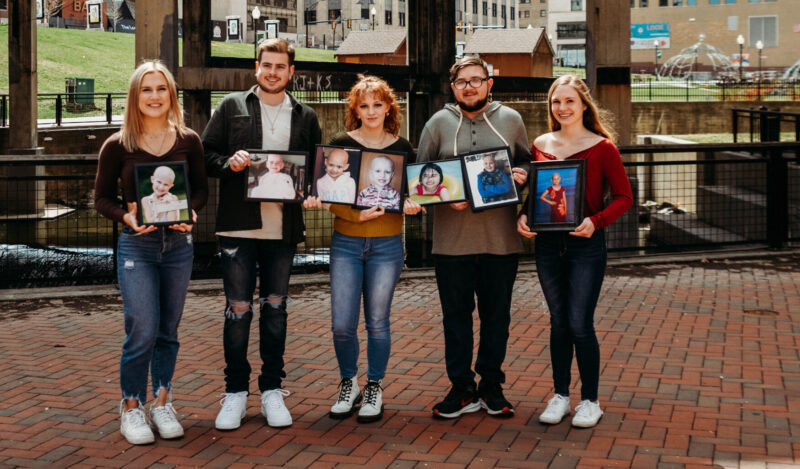 Graduating high school seniors Kemery Kerschner, Luke Louzader, Madison Lehman, Jacob Sypert, and Morgan Loudon hold photos of themselves as toddlers during cancer treatment. Luke is also holding a photo of Taylor Degenhard and Madison is holding a photo of Lydia Miyashita, who did not survive. Photo credit: Paige Mireles.

Five high school seniors recently gathered in downtown Akron for photos but there was no time to linger once the last image was snapped. They dashed to rescheduled softball games, spring musicals and other social engagements – just as it should be. The busy lives of teens about to embark on the world is not something to be taken for granted, and especially in the case of these five. These soon-to-be graduates are already “graduates” of Akron Children’s Hospital’s Showers Center for Childhood Cancer and Blood Disorders.

Kemery Kerschner (Ashland), Luke Louzader (Medina), Madison Lehman (Mansfield), Jacob Sypert (Niles), and Morgan Loudon (Beloit) were patients in cancer treatment at Akron Children’s around the same time in early childhood. Katelynn “Boo” Magyar (Rittman) was not available for the photo shoot but is very much a part of this group of lifelong friends.

Their families got to know each other and support each other through those difficult times. After treatment, they kept in touch during summer outings and camps for kids who have experienced cancer. 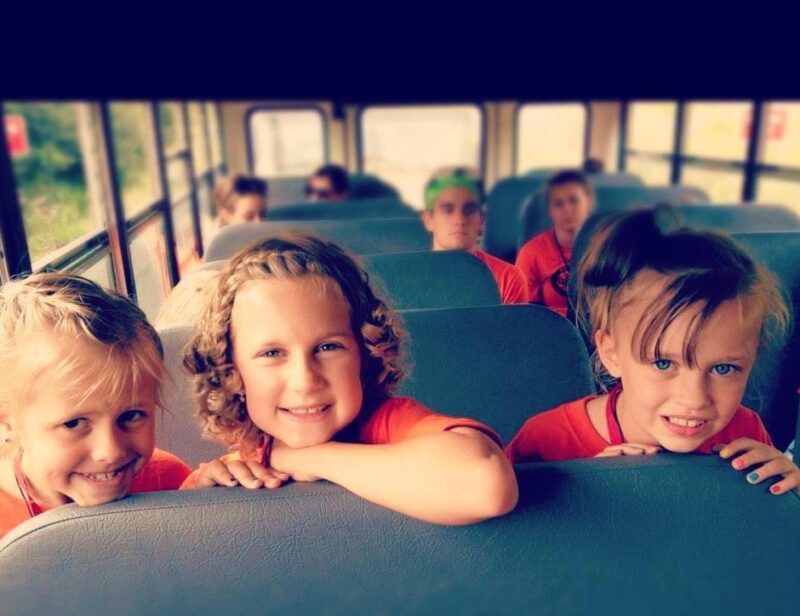 And they never forgot the two young girls who were in treatment with them at the same time who did not survive. In the photo, they are each holding a photo of themselves during cancer treatment years. Madison is also holding a photo Lydia Miyashita (Orrville) and Luke is holding a photo of Taylor Degenhard (Louisville) to honor and remember them – and with the blessings of their families.

As one of the mothers who watched her toddler undergo biopsies, surgeries and weeks of inpatient chemotherapy, Tyjanna Lehman thought it was important to get a photo of these close friends who were not only surviving childhood cancer, but thriving.

“Cancer treatment itself is so harsh,” said Tyjanna. “And most of our kids haven’t really seen any late effects. To see them all so healthy and doing so well … just makes us cry. They are living real lives, not debilitated lives.”

Not all memories of childhood cancer are bad

Morgan, who will graduate from West Branch High School, says some of her memories of treatment have blurred but she does remember the love she developed for therapy dogs, and music and art therapy.

“My fondest memory is when the music therapist came in and taught me how to play songs on a ukulele,” she said.

“I vividly remember the nurses making everything easier,” said Kemery, a senior at Ashland High School. “Nothing was ‘stupid’ for me to be worried about or afraid of. They were also insanely good at filling me in on what was going on, rather than just assuming I was a kid who had no idea what anything meant.”

Boo, who will graduate from Norwayne High School, remembers the doctors and nurses dressing up in “Wizard of Oz” and other themed costumes at Halloween. She remembers endless gifts of dolls, hats and stuffed animals.

“In all honesty, I don’t remember it being a life-threatening and awful time like my parents,” she said. “I remember playing on Barbie.com whenever I wanted, seeing my friends just down the hall, and eating fried chicken from the cafeteria.”

Jacob, who will graduate from McDonald High School, said he was very young when first diagnosed. He remembers being scared and then cancer came back when he was 9.

While he thinks he blocked out many of the bad memories, he has not forgotten that Dr. Jeff Hord, director of the Showers Center, made him a root beer float after every spinal tap.

“It was something I looked forward to,” he said. “However, as of today, I hate root beer!”

Madison, who attends Crestview High School in Ashland, said although most of her childhood cancer memories have faded, she too remembers the kindness of the doctors and nurses.

“One doctor,” she recalls, “finally figured out he had to give me a sticker in order to pull my head out from under my bedcovers. And one very special intern tried desperately to find me a stuffed cat that looked like my cat at home. I missed my cat so much since I spent the first 30 days in the hospital and a lot more inpatient time after that.”

She has kept in touch with three nurses who cared for her beginning at age 4.

“Shout of to Angela, Amy and Robyn,” she said. “You know who you are and how much you are loved.”

The “silver linings” of childhood cancer

Morgan, like her friends, found “silver linings” associated with childhood cancer like attending Camp Ed Bear and the Prom to Remember. It was during these adolescent and teens years that the bond between these teens got even stronger. She considers those in the group photo to be “lifelong friends.”

Another silver lining, for her, was watching caring and compassionate people do their jobs day in and day out.

“I have met a number of people who dedicate their lives to improving the conditions of others and it really is breathtaking,” she says.

Luke, a senior at Medina High School, agrees. He remembers childhood cancer as “a long and painful battle,” and yet it enabled him to meet “amazing people.” He especially looked forward to seeing his friends each year at summer camp, and how they changed. 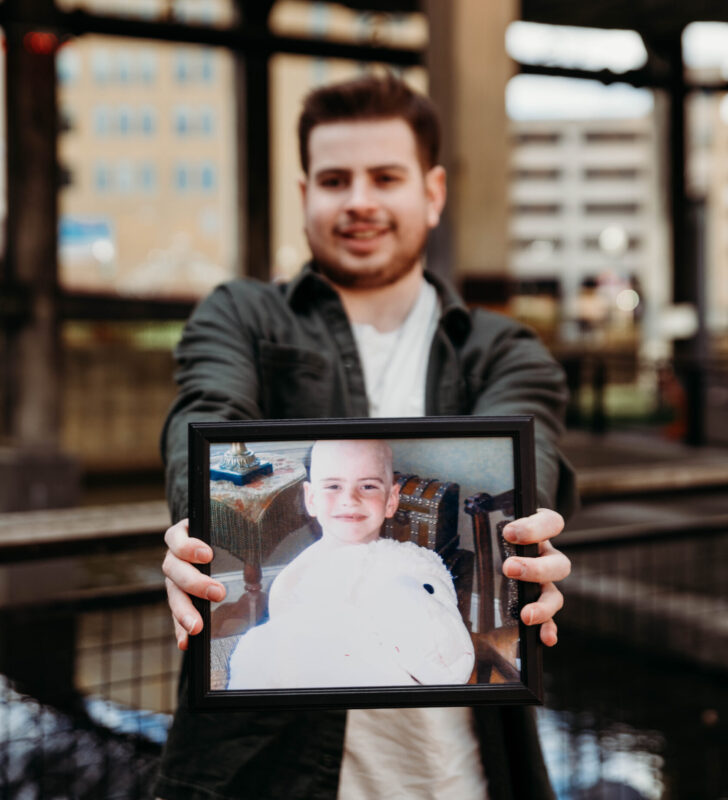 Luke Louzader will graduate from Medina High School. One of his favorite memories is “going to late night football games and having fun seeing all of his friends.” Photo: Paige Mireles. 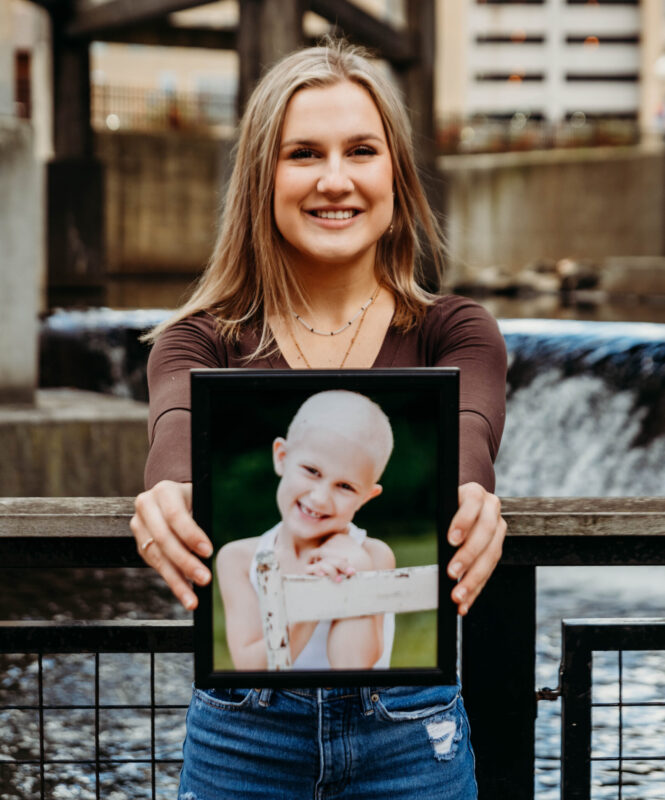 “Childhood cancer is a beast, but kids are resilient and can do anything and overcome anything they put their minds to,” says Kemery Kerschner, who will graduate from Ashland High School. Photo: Paige Mireles

Living life to the fullest

Kemery admits that she struggled at times with anxiety, depression and survivor’s guilt. Nonetheless, she became an accomplished cheerleader and tumbler – and that’s with having less than one fully-functional kidney. She believes mastering these sports helped her rebuild core muscles lost after her surgeries.

Madison said childhood cancer made her shy but she gradually overcame it. By high school, she had embraced cheerleading and softball.

Jacob has enjoyed being on his high school’s bowling team and marching band, spending time with his girlfriend and playing X-box. 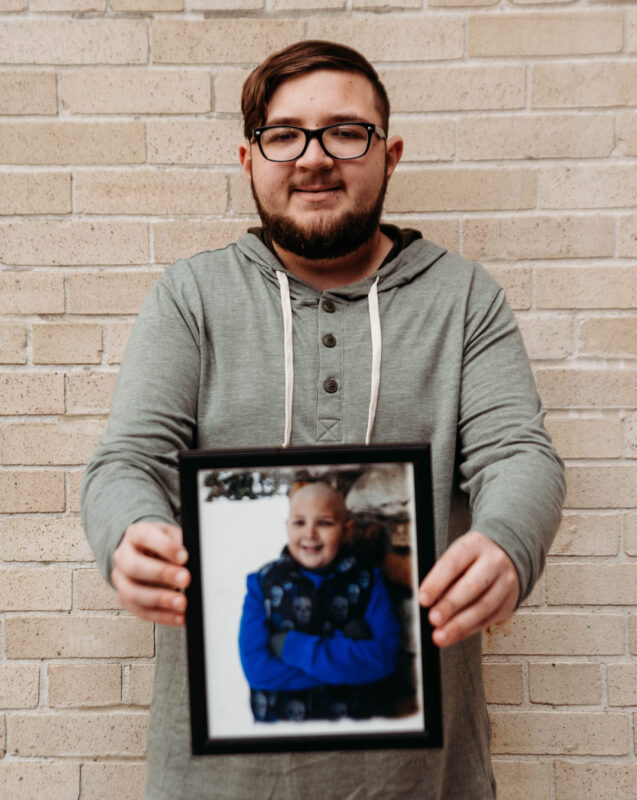 Jacob Sypert will graduate from McDonald High School, where he was on the bowling team and marching band. He is still deciding on his next steps. Photo credit: Paige Mireles.

Morgan plans to attend Ohio State University with the goal of becoming a physician. Boo also plans to attend medical school after her undergraduate studies at the College of Wooster.

Luke plans to study communications first at Cuyahoga Community College and then Kent State University, while Madison hopes to become a biology teacher.

“I always appreciated the way she treated me. She truly was such an amazing person and it only feels right to honor her in this way,” said Kemery.

And she has no doubt that her bond will continue with the friends she has made along her childhood cancer journey. 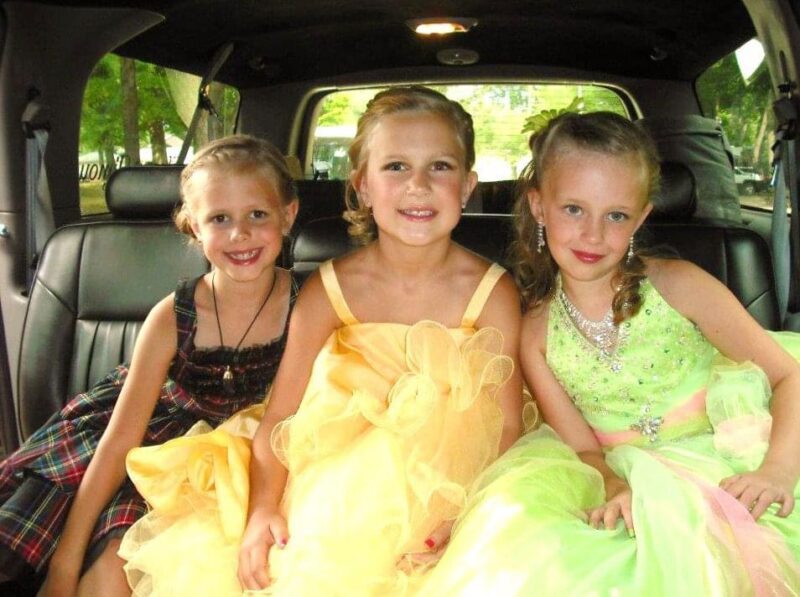 Boo, Kemery and Maddie on their way to the Camp Quality Prom. Lehman family photo.

“The bond between me and those other seniors is something I don’t know that I will ever be able to put fully into words,” she said. “We’ve watched each other go into remission, as well as suffer more rounds of chemo and watch friends pass away. We have all really been a rock for each other, and I am still incredibly close with a few of them that I met at Camp Ed Bear and Camp Quality. We still talk daily and know everything about each other’s lives. It’s always been nice to have other people who understand what I went through on such a deep level.” 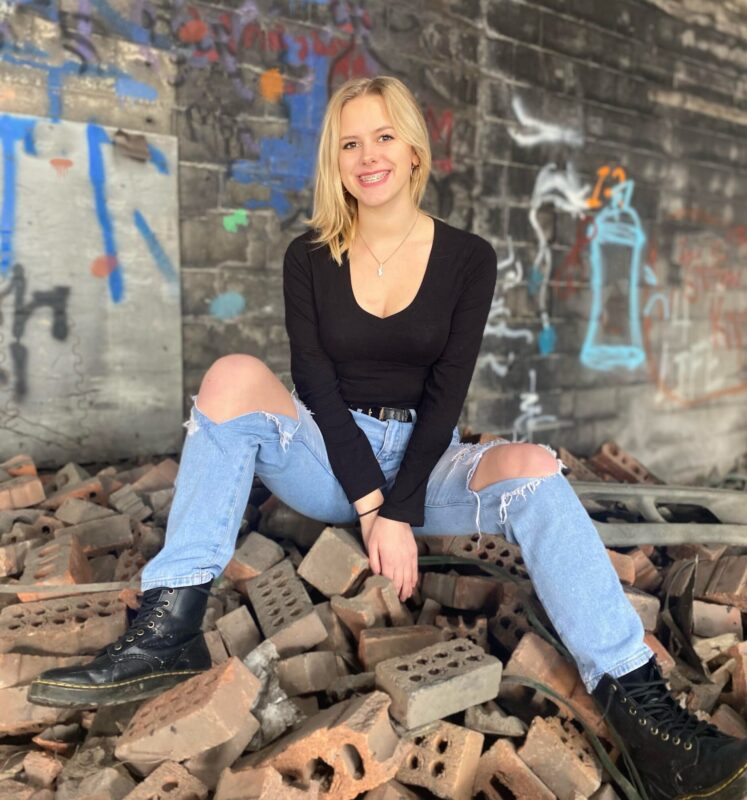 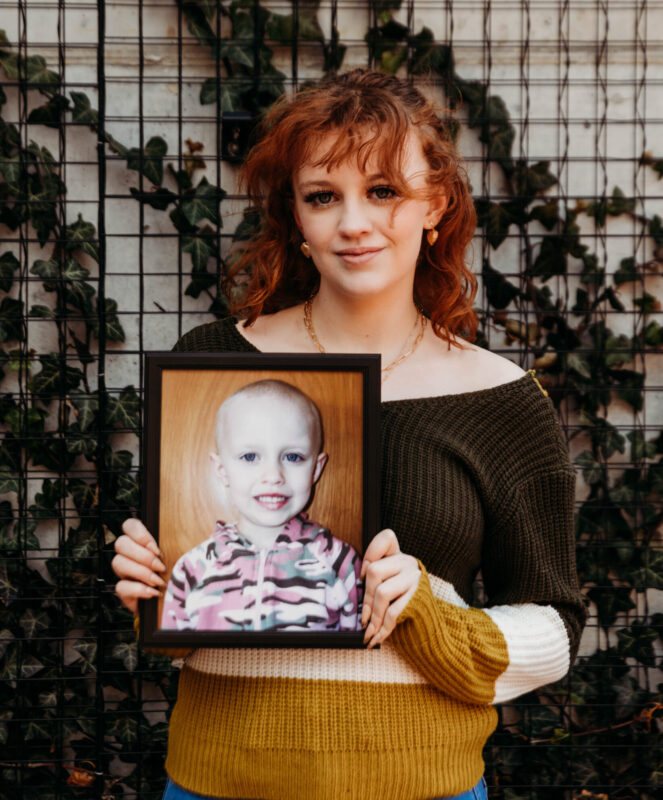 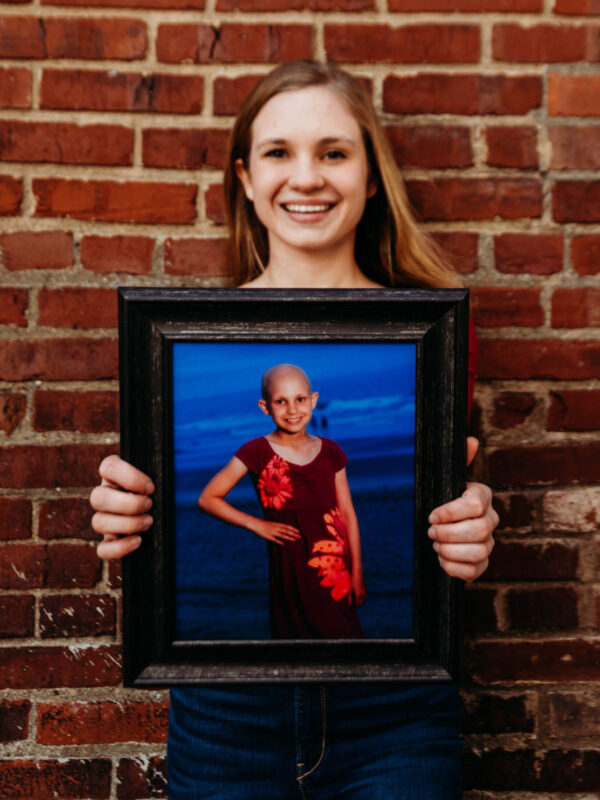 Morgan Loudon will graduate from West Branch High School. She is a member of National Honor Society and organized blood drives at her school. Photo credit: Paige Mireles.

These remarkable young people have already left their mark on the world. They have been involved with cancer research through the St. Baldrick’s Foundation and have advocated for pediatric cancer patients in Washington, DC. They have excelled in school and sports.

They’ve learned lessons that perhaps only survivorship can teach.

“Having childhood cancer affects every aspect in my life,” said Boo. “It has made me grateful for each and every day I have. It makes me more thankful for my present and future.”

Kemery adds, “It’s incredibly important to do what you want and what makes you happy, because you never know when that opportunity will be taken from you.”

Congratulations and best wishes to the Class of 2022! 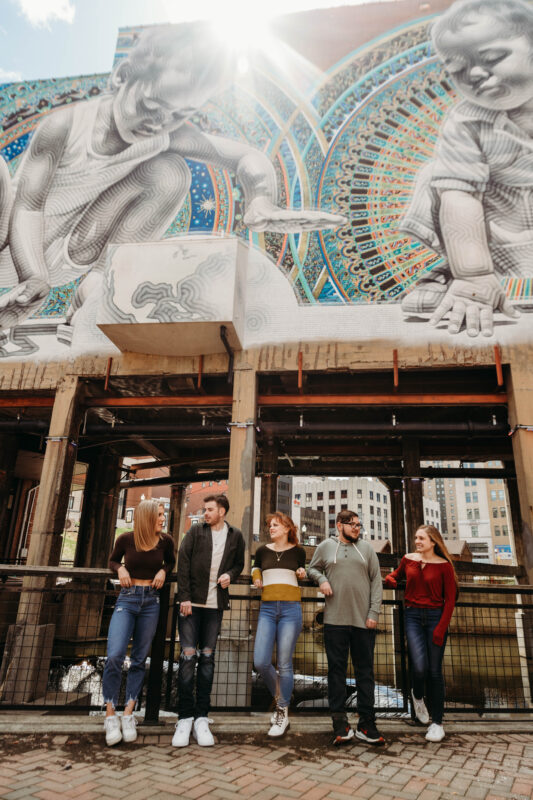 These five teens – along with Boo Magyar (not pictured), met as toddlers during cancer treatment at Akron Children’s Hospital. They have stayed close friends and are now graduating high school. Photo: Paige Mireles.

Down syndrome awareness month reminds us we have more in common than not
New procedure helps patient with arthrogryposis
Meet Ryland: A MIS-C survivor
Women in philanthropy: Virginia "Gina" Drosos
Return to play: Is it safe to let kids play sports following a COVID diagnosis?