a a a
skip to main content
akronchildrens.org
Home > Inside Blog > Retirement > Barry Nolf plans to let his curiosity run wild during retirement 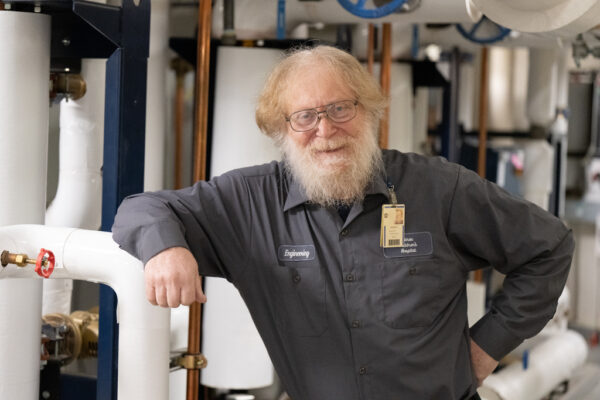 Barry Nolf, engineering supervisor, retires after 22 years at Children’s. He is shown standing alongside the hospital’s new domestic hot water system, which he was involved in installing.

“Inspiration comes from the strangest places,” Barry said. “It’s why I like to listen and discuss ideas. All people can teach you something.”

At Akron Children’s, Barry has found a lot to inspire him. Sometimes, a current event or production problem sparks action. Other times, it’s his colleagues who amaze him with their ingenuity and quick action.

After 22 years at Akron Children’s, Barry retires on March 16. He plans to spend time with his family, travel, relax and “ponder perpetual motion.”

What brought you to Children’s?
My wife, Vicki, who has worked in Children’s emergency department for 32 years, suggested I apply. I was self-employed and the economy was beginning to slow. I was hired by Tim Tomayko and Jim Madden. 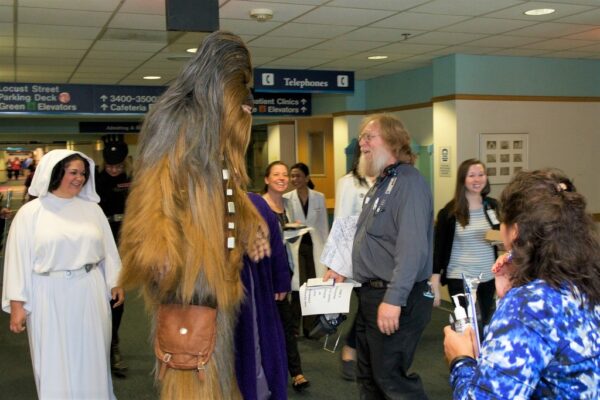 Barry Nolf’s hair and beard grow out during the winter, earning him the nickname “Animal” after the Muppets character. When he came face-to-face with Chewbacca of “Star Wars” at the hospital, Barry enjoyed the moment of meeting someone as hairy as himself.

Have you always worked in the same department and role?
I started as a technician in engineering, then became a supervisor, overseeing a great crew. They keep me in awe with how they handle situations! For example, the crew working on January 22 called me early in the morning about a work order from Children’s main kitchen because the gas for the appliances wasn’t working. After checking, they saw no movement in the main meter’s dials. They checked one of the valves and saw water in the gas line. Then, they called Dominion Energy. About a half hour later, a construction crew arrived to find a water line break and Bowery Street caving in. But it was our staff who found the issue before anyone was aware and set everything in motion.

What have your biggest contributions been while here?
I’ve worked with teams on many cost-saving and/or life-preserving solutions. For example, I worked with Adam Whisman, regional facilities maintenance manager, and Kirby Stoller, senior construction project manager, during COVID-19 to create isolation areas by altering existing air-handling equipment.

My most recent contribution involved specifying, laying out and overseeing a new domestic hot water system installation for the main hospital. The new system is computer-controlled to maintain water temperature at the Joint Commission on Accreditation of Healthcare Organizations’ specified temperature. All but one section of our main building is tied into it, and it can be added in the future. When that happens, the main hospital will go from 3 hot water systems to 1 central system, which will streamline maintenance and operating costs.

How has Akron Children’s changed since you started here?
When I started, it was as if you were in a child’s imagination of what Children’s could be. There was a circus wagon full of arts and crafts pulled by volunteers dressed as clowns. There were puppets and a real pony and dogs going to kids’ rooms. Monthly concerts played in our atrium. Our walls and carpets were different colors. It was wonderful! 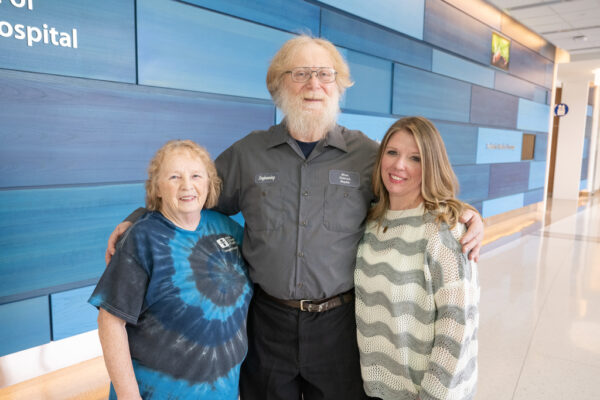 What gave you the most satisfaction at work?
To be able to work in a place where my wife and granddaughter, Jennifer Henley in human resources, work. And starting in March, my youngest granddaughter, Callie Hartline, started working at Children’s.

With so many little children here, did someone or something especially touch your heart?
During the winter, I let my hair and beard grow out, mainly because it gets cold working outside on Children’s roof. I get so hairy that people nicknamed me “Animal” after the Muppets character. Once, just before Christmas, while walking in the hospital, a mother and her children passed me. The littlest one, a small girl, kept pausing, turning and looking at me. I was ready for the common question, “Are you Santa Clause?” Instead, she grins at me and says, ”Hello, Jesus!” I was caught off guard and could only say “hello” back. 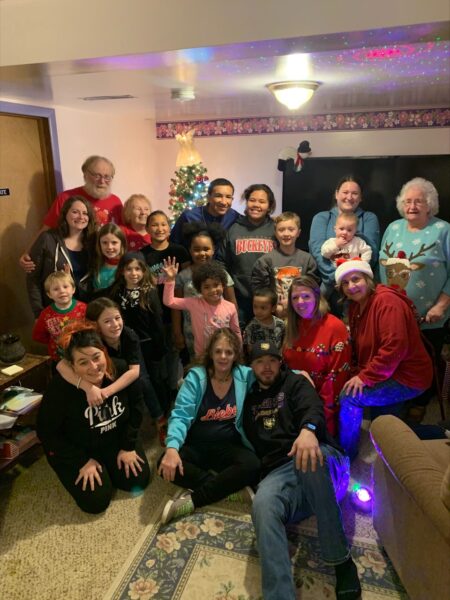 Barry Nolf enjoys socializing with his family, which includes his wife, 3 daughters, 6 grandchildren and 5 great grandchildren.

Do you have any advice for people just starting at Children’s?
People are the most important thing. There are no problems, only solutions. No matter what you do today, most of all, have fun!

What’s the last movie you saw?
“It’s a Wonderful Life” at Christmas. It rejuvenates me!

New role as NICU provider is destiny for CNP Amy Jackson
Patient Experience Spotlight: Dr. Jodi Regan
Laurie Fortune's retirement recollections will include tiny babies and big memories
CNP Erin Bujnoch is having a whale of a time as our newest provider in Boardman
Rick Trego plans a retirement full of good times and projects in his “man cave”