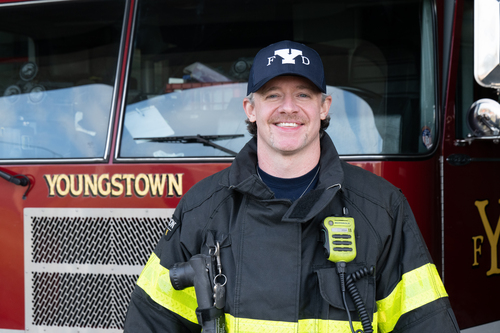 Lieutenant Brian Charles, a Youngstown firefighter who was injured on the job, was hospitalized in Akron Children’s Hospital’s Burn Center for 10 days to undergo wound debridement, dressing changes and skin grafting to the second- and third-degree burns he suffered on his legs.

As the son of a firefighter, Brian Charles, age 38, knew from a young age he wanted to follow in his father’s footsteps. Having served as a firefighter in Youngstown for the past 12 years, Brian is no stranger to house fires, so he didn’t think twice about the fire he was getting ready to fight on Dec. 1, 2021.

“We were the second fire truck to arrive,” he said. “It was a Cape Cod style home, and the fire was on the second floor.”

While standing on the main floor of the house with his hose aimed at the hotspots on the ceiling below the fire, Brian was caught off guard when the ceiling collapsed trapping him under smoldering debris.

“Plaster and drywall rained down on me,” he said. “It felt like my legs were on fire.”

Brian was able to make his way to the door and out to the front lawn where he started removing his gear to get a better look at his legs.

“My pants weren’t burned or damaged, but when I removed them, the skin was peeling off my lower legs,” he said.

Brian surmises the intense heat and steam caused by the fire made its way up his pant leg from the ankle opening and caused the steam to burn his legs. Although he was originally taken to St. Elizabeth’s in Boardman, the decision was made to transport him to Akron Children’s Hospital’s Paul and Carol David Foundation Burn Institute – one of only two accredited adult and pediatric burn centers in Ohio. 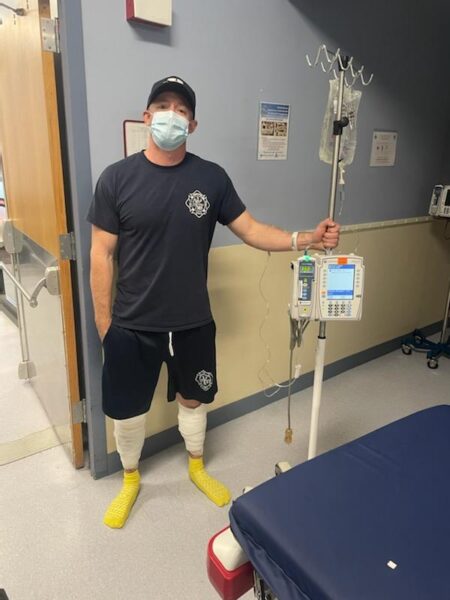 Brian was injured after a ceiling collapsed on him while he was fighting a fire in Youngstown.

“It was a good decision to transfer Brian. He presented with deep second and third degree burns to both his lower legs,” said Dr. Anjay Khandelwal, chief, division of burn surgery, who cared for Brian. “His burns required the care of a specialized team to control his pain, prevent infection, preserve function and ensure a good cosmetic outcome.”

“Deep second-degree and third-degree burns do not heal on their own. They close by forming scar tissue, which is tight, painful and itchy,” said Dr. Khandelwal. “This can cause permanent functional limitations and disfigurement, and lead to numerous consequences if not dealt with appropriately.”

Within a few days, it was determined that Brian’s burns would not heal, so a decision was made to perform skin grafting. Skin grafting involves carefully removing all the burnt skin and tissue – while also preserving tissue that is alive and healthy. The next step entails shaving skin (from another part of the body) thinner than a sheet of paper and transplanting it to the burned area. In Brian’s case, skin was taken from his thigh.

“Oftentimes we put holes in the graft (a meshed graft) to cover larger areas, as we did for Brian. Other options include non-meshed or sheet grafts for selective areas as well as cutting-edge technologies like spray-on skin,” said Dr. Khandelwal. 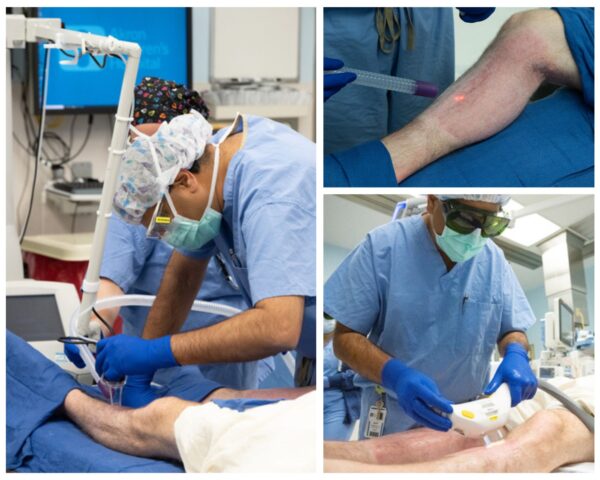 Dr. Anjay Khandelwal, burn surgeon, performs laser treatments on Brian’s leg burns to improve the skin’s elasticity and appearance. Akron Children’s offers the most advanced and powerful laser treatments for pediatric and adult burns of any center in the multi-state region. The Burn Center is one of only a few centers to routinely perform dual laser therapy (the Lumenis® Stellar M22® and UltraPulse® Fractional CO2) using experienced plastic and burn surgeons to offer the most advanced reconstructive options for burns.

“It was a very painful process but the nurses and team in the Burn Center are so compassionate,” Brian said.

After his discharge, Brian returned to the hospital for weekly checkups and to begin laser treatments which are designed to improve the skin’s elasticity and blood flow which helps break up the scar tissue and improve the overall appearance.

“The laser treatments help to decrease scar thickness, pain and itching while improving elasticity, pliability and the color match, texture and appearance of the scar,” said Dr. Khandelwal. “As opposed to breaking the scar tissue and causing more trauma, we can rehabilitate the scar and reduce the need for more involved reconstructive surgeries. The benefit for patients is dramatic – both physically and psychologically.”

“Behind my right knee is one of the burn spots that gets very stiff and locks up,” said Brian. “The laser treatments are supposed to help with range of motion, and as a bonus it also helps with the itchiness which can be very intense.” 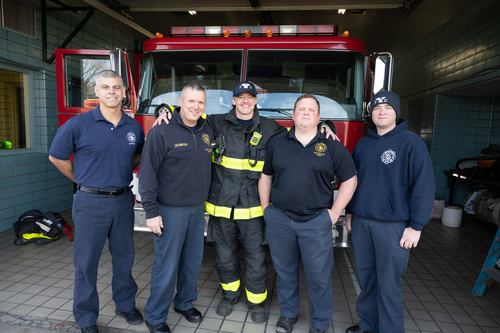 On Dec. 14, 2022, Brian returned to work at the Youngstown Fire Department after taking a year off to recover from his burn injuries.

“We typically provide treatments every 8 weeks and usually see improvement after the first treatment,” said Dr. Khandelwal. “Some patients may require 6-8 treatments depending on their degree of scarring.”

“This is an unfortunate injury I wouldn’t wish on anyone,” said Brian. “But I feel so lucky to have such an amazing team of doctors, nurses and therapists so close to home. I know I’m in great hands.”

Creativity, fun are keys to keeping kids fit this winter — in a pandemic
Akron Children’s recognized by Joint Commission for fall prevention program
The show must go on: ACL tear rehabilitation continues after remobilization
Finding a primary care provider through virtual interviews
What is frostbite?