a a a
skip to main content
akronchildrens.org
Home > Inside Blog > Employee Features > Jayme Osborn’s retirement will feature numerous hobbies and fun adventures 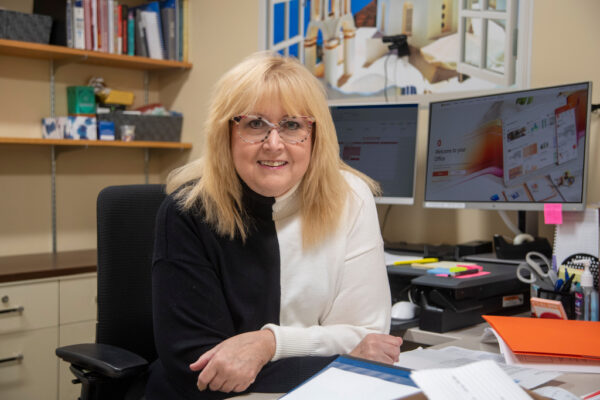 Jayme Osborn, laboratory information systems manager, came from a close-knit family with cousins who lived nearby. They helped each other out and enjoyed doing things together. For Jayme, whose older cousin worked at Akron Children’s, it meant having a friendly family member who helped her explore career options.

“My cousin, Mark Watson, was Children’s laboratory administrative director at the time,” Jayme said. “He took my sister and me on a behind-the-scenes tour of the laboratories where we saw people performing tests in hematology, chemistry, the blood bank, immunology and microbiology. It fascinated me, and I decided then and there that working in Children’s labs was what I wanted to do.”

That decision paved the way for Jayme’s 43-year career at Children’s, which comes to an end on October 31. As someone who enjoys trying new things, Jayme looks forward to revisiting old hobbies, especially cake and sugar cookie designing, spending time with family and friends and traveling.

What brought you to Children’s?
As a teenager, I volunteered here as a candy striper and saw many different areas of the hospital. I studied medical technology at The University of Akron. The program included a fourth-year component where we did clinical training in a medical laboratory. I applied for and was accepted by what is now known as the Akron Cooperative Medical Laboratory Science Program. That education helped me to get a full-time job in Children’s pathology and laboratory medicine department after graduation. 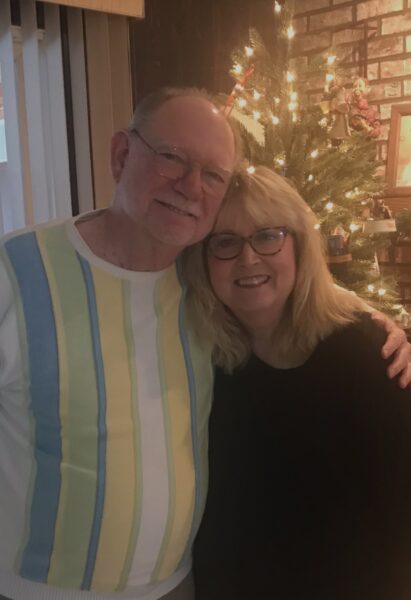 Mark Watson, who worked in multiple roles at Akron Children’s, is Jayme Osborn’s cousin. He showed her Children’s laboratories, cementing her decision to work at Children’s.

Have you always worked in the same department and role?
I’ve always worked in the laboratories, starting as a med tech in the hematology lab before becoming a senior medical technologist. Later, I moved into lab quality assurance, implementing processes to help improve the overall operations, efficiency and patient safety in our labs. In 1980, Children’s became the first of the Akron-area hospitals to computerize its inpatient and outpatient medical testing. That’s when I became involved with the laboratory information system (LIS). Now, so much of what we do in pathology and laboratory medicine relies on the LIS. It helps the hospital seamlessly coordinate so many functions, including patient check-in, order entry, specimen processing, result entry and other clinical details.

What have your biggest contributions been while here?
I was integral to the LIS selection process and implementation, which has led to several leadership roles. For instance, I met other LIS clients through the Soft Network Users Group (SNUG), which included networking, annual SNUG healthcare information technology summits and participating on the board and as SNUG president. I also joined many Children’s committees over the years, including the Employee Foundation Council, even serving as its president. These experiences led to so many great connections and wonderful friendships! 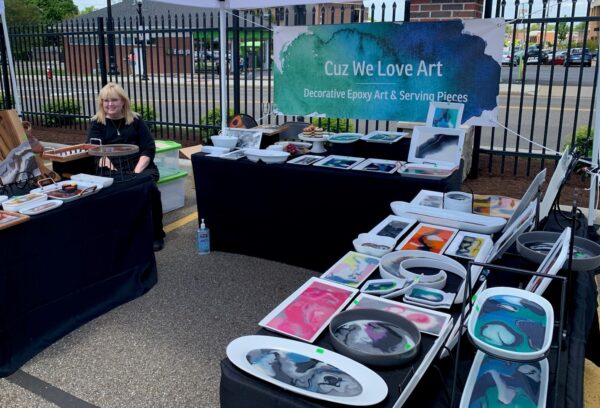 Jayme Osborn is shown at an art show with some of the epoxy art and serving pieces she creates and sells along with her cousin Erin.

How has Akron Children’s changed since you started here?
Children’s laboratories have undergone so many improvements, not the least of which is its computerization and automation of testing with state-of-the-art technologies. Another example is the emphasis on safety and protective gear, including fluid-resistant gowns and shields the techs work behind to minimize splash risks.

What’s your most memorable moment at Akron Children’s?
I remember Dr. Carl Krill, Jr., former division chair of the hematology/oncology clinic, coming into the hematology lab looking for a patient’s lab results. We looked and looked and couldn’t find the patient’s specimen. The lab had just become computerized, which required us to wrap adhesive computer labels around specimen containers. Sometimes staff didn’t get it wrapped just right, and some of the adhesive was exposed. Back then, we weren’t required to tie our hair back, and I had very long hair. As you might guess, we finally found that patient’s specimen caught in my hair. We didn’t tell Dr. Krill where we found it! 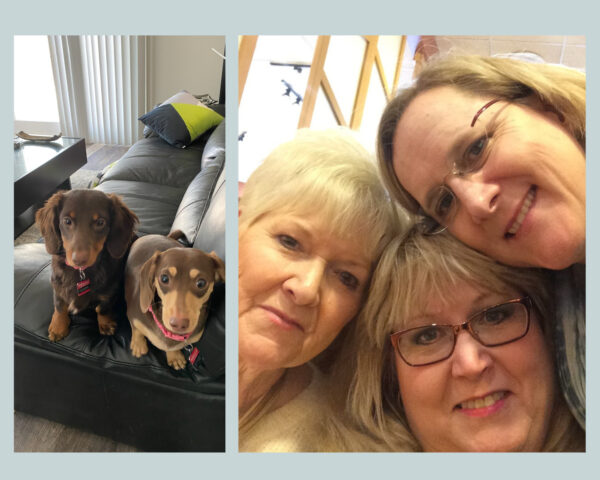 Jayme Osborn’s two miniature dachshunds pose for a photo. Jayme (center) is shown with her mom and sister at one of their lunch outings.

What do you look forward to the most in retirement?
My relationships with my family have always been the center of my life. I look forward to activities that involve them, such as celebrating holidays, especially Halloween, which is my favorite holiday, and traveling to see them. I’ll also continue making epoxy art/serving pieces, which is something my cousin Erin and I both enjoy. We sometimes participate in art shows together.

What’s your idea of a perfect day?
A fall day that starts with sleeping in, enjoying a cup of tea and road tripping with my mom and sister. We like visiting, shopping and eating lunch out someplace new.

Do you have any advice for people just starting at Children’s?
Be friendly and kind. A simple smile goes a long way.

What couldn’t you live without?
God, family and friends, my dachshunds, sunshine, mascara and lipstick!