a a a
skip to main content
akronchildrens.org
Home > Inside Blog > Tips & Advice > How to choose a healthy breakfast cereal 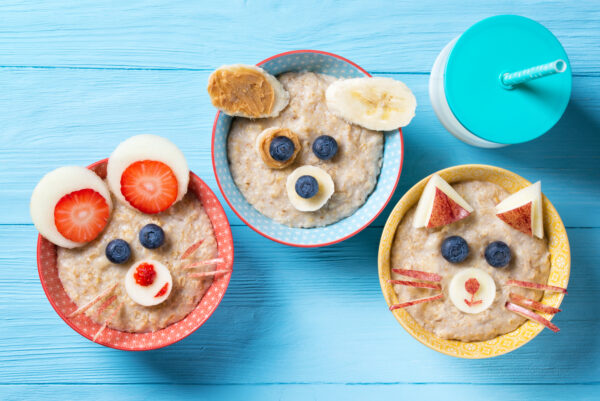 Make breakfast both fun and healthy by adding cut up bananas, berries, milk and peanut butter to your kids’ morning oatmeal.

With breakfast being touted as the most important meal of the day, it’s important to get it right! On busy school days when parents are trying to get their kids out the door on time, cereal when paired with a protein source, like milk or eggs, can help keep your kids satiated until lunch time. But not just any cereal will do. Akron Children’s Hospital registered dietitian Danielle Dimengo offers some advice for choosing a healthy one.

“Read the label on the box and watch out for added sugar,” she says. “Dry cereals are often loaded with sugar and/or high fructose corn syrup, artificial preservatives, and dyes. They also lack protein, making certain kinds of cereals an unbalanced breakfast choice.”

Both the American Heart Association and the American Diabetes Association recommend limiting added sugar to 24 gm/day or less. Many children are consuming that much just in their breakfast – increasing their risk for type 2 diabetes.

Danielle says when someone consumes a sugary cereal like Frosted Flakes, especially in the absence of a fat or protein source such as cow’s milk, there is a rapid spike in blood sugar levels because these cereals are broken down by the body quickly in comparison to something more complex, like a bowl of oatmeal with peanut butter, for example.

“This spike in blood sugar causes a release of the hormone insulin from the pancreas to complete the job of removing the glucose from the blood into the cells to be used for energy,” she says. “Sometimes this rapid digestion and absorption of food and rapid onset of insulin action on glucose can cause feelings of a ‘sugar crash’ and premature hunger cues. Sugary cereals are typically also lacking in fiber, which helps you feel full.”

When purchasing cereal, look for cereals that contain whole grains as the first ingredient in the ingredient list. Plain Cheerios, Kashi and Total cereals are good choices. 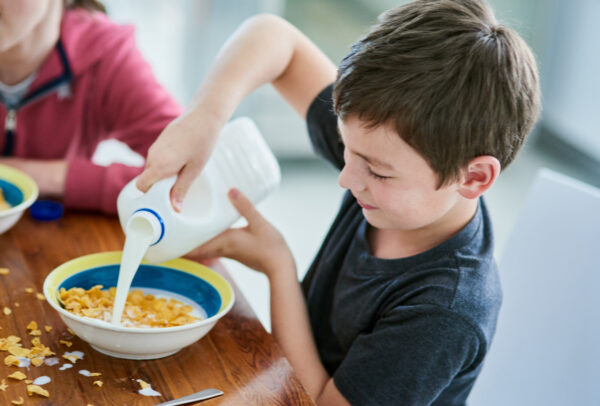 Look for cereals rich in whole grains and fiber and low in sugar. Pair it with a protein source, like milk, to feel full longer.

“Plain Cheerios is considered a whole-grain cereal and contains only 1 gram of sugar per serving,” says Danielle. “Other good choices are fiber-rich cereals like old-fashioned rolled oats (which you can prepare with cinnamon and sweeten with Stevia or fresh or frozen berries), bran flakes, shredded wheat and puffed rice cereals. Fiber-rich is considered 3 grams or more per serving.”

On their own these cereals might not sound appealing to kids, but Danielle says jazzing them up with fresh fruits like banana slices or berries, raisins or sprinkling them with some chopped nuts and cinnamon can add both flavor and fiber. Many of these same ingredients can be added to hot cereals like oatmeal as well. Hot cereals lend themselves to adding things like chia seeds, flaxseed, and even peanut butter to boost their protein and nutrient content.

“I love to tell my patients to combine protein and produce at the very least,” she says. “When possible, try to have at least 2 food groups present. For example, combine 1 cup oatmeal with 1 cup frozen berries melted in, sprinkle with cinnamon and add 1 cup low-fat milk.”

For other healthy breakfast recipes kids will love, click here.

How to care for face masks
Three Ways to Relieve Infant Constipation
Five ways to prepare for your labor and delivery
Make sure a new pet is “fur” you
Measles: What's behind the historic outbreak, who's at risk