a a a
skip to main content
akronchildrens.org
Home > Inside Blog > Employee Features > Akron Children’s offers free tuition, other benefits to those pursuing associate degree in nursing 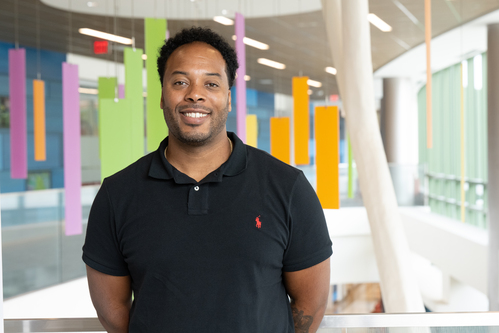 Charles Tazewell, age 36, says people have told him since his early 20s that he would make a good nurse. But it’s not a path he initially took. After graduating from high school in Cleveland, Charles enrolled at the University of Akron to pursue criminal technology and forensics.

“I thought I wanted to become a police officer,” he said. “Instead, I landed at Northcoast Behavioral Healthcare, an inpatient care center for acutely mentally ill adults, where I worked for 13 years in various roles.”

While he enjoyed helping people and seeing them get better, Charles says he experienced a lot of burn out in his job due to staffing shortages, which led him to contemplate a different career path.

“My mom knew I had nursing in the back of my mind and when her co-worker told her about Akron Children’s Career Launch Plus program and its associate degree in nursing (ADN) track, she called me about it,” said Charles. “When she told me the details – like the fact that it covered childcare costs and tuition – I figured it had to be too good to be true. I questioned if it was real.”

Patrice Russell, who coordinates the program, says Career Launch is indeed real and was designed to help the hospital build a diverse workforce that reflects the patients, families and communities it serves.

As one of the first ADN students, Charles, a Black male and an Air Force veteran, represents the diversity the hospital looks for.

“Career Launch Plus allows us to give students more time to study because they’re not working while they’re in school. As we met with local nursing programs, they stressed the importance of having dedicated time set aside for this rigorous degree,” said Patrice. “We’ve seen success getting students to graduation with Career Launch. Mentorship and connections with other students and hospital leaders are just part of what makes this program special.”

Through the Akron Children’s program, Charles has the opportunity to finish school faster, benefit from mentoring and professional development opportunities and a guaranteed job upon graduation.

“So many companies don’t invest in their employees anymore,” said Charles. “I didn’t have any reservations about committing to Akron Children’s for 3 years because I want to work for a company that takes care of its people and is invested in my future.”

Charles also said he got a good vibe the very first time he stepped inside Akron Children’s.

“I was used to a lot of chaos and negative energy at my old job,” he said. “At Akron Children’s, everyone was so pleasant – starting with the visitor monitor at the information desk when you first walk in the door.”

Charles is currently enrolled at Kent State University’s Twinsburg campus, which is convenient to his home and his 4-month-old’s childcare location (the Career Launch Fund supported by donors, pays for childcare while Charles is in school). In addition to Kent State’s satellite campuses, Akron Children’s is recruiting students to join Lakeland Community College, Stark State and Youngstown State’s nursing programs.

“Accessibility is important,” said Patrice. “The hospital looks to add additional schools so that more community members can pursue their dreams of becoming nurses.”

After graduation, Charles will be able to perform most of the same duties as his counterparts who have a bachelor’s degree in nursing (BSN).

“The main difference is I won’t be able to work in management or in certain specialties that require a BSN,” he said.

Charles knows that he will be required to complete his BSN within 5 years of employment if he plans to stay on at Akron Children’s.

“I plan to work some and then go back to school,” he said. “I want to get it done and out of the way.”

Slated to graduate in summer 2024, Charles hopes to return to his roots and work in one of Akron Children’s behavioral health settings.

“I’ve never experienced such a supportive environment before,” he said. “I wish there were more employers like Akron Children’s.”

For more information or to apply for the ADN program, email careerlaunch@akronchildrens.org or call 330-543-5504.