a a a
skip to main content
akronchildrens.org
Home > Inside Blog > Patient Stories > Karson celebrates 100th infusion with disco party

As 5-year-old Karson Ross arrived for his infusion, he had no idea the staff behind the doors in his sedation room was about to spring a party on him. 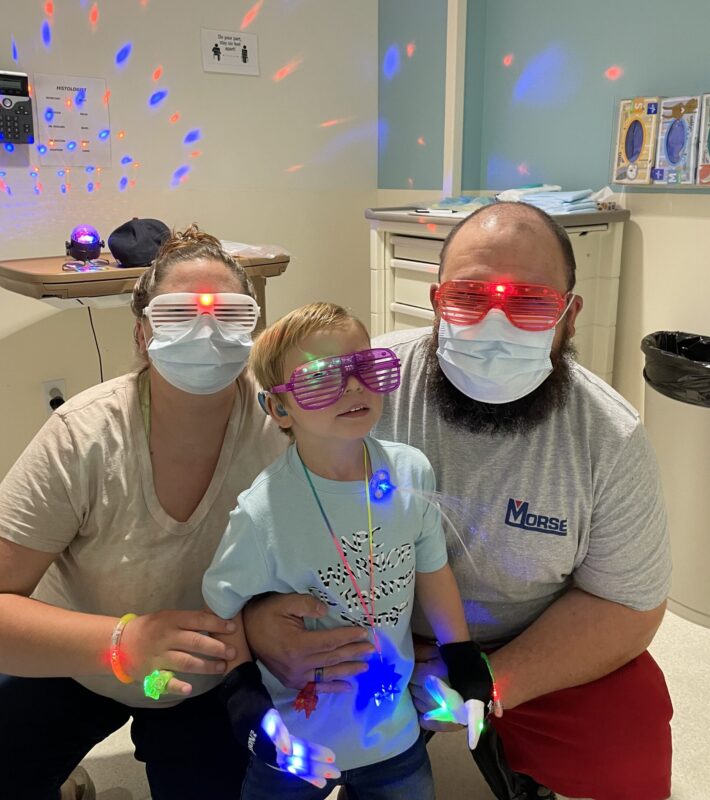 There were disco lights, cool light-up gloves and eyeglasses for Karson, and even a bit of dancing – all to mark the 100th infusion Karson would receive of an experimental treatment for a rare neurodegenerative disorder called Niemann Pick Type C (NPC).

Dr. Ian Rossman, a pediatric neurologist, said Karson’s progress since starting on the treatment is “amazing.” He is seeing neurodevelopmental progress rather than stagnation or decline. 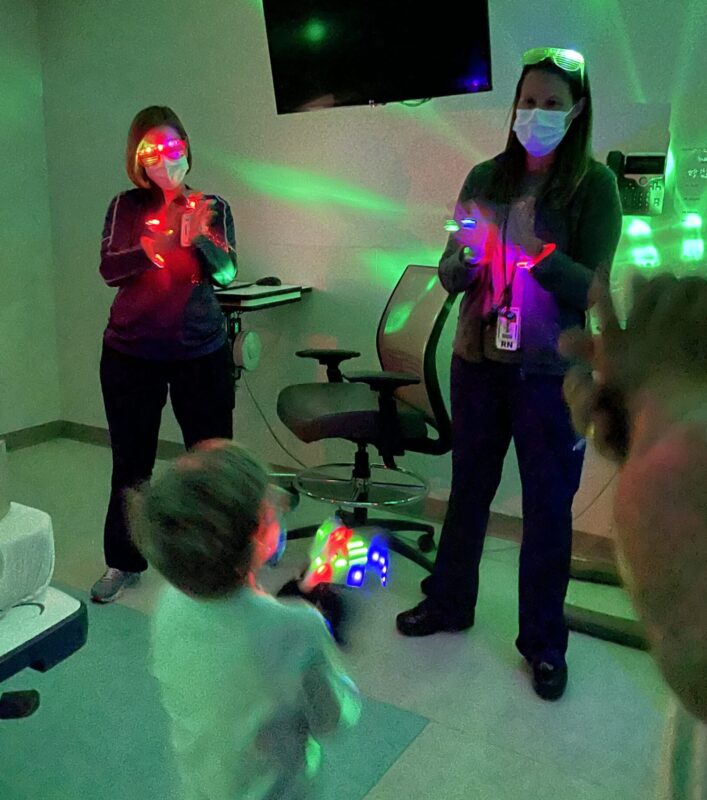 “His ability to move his eyes up and down is perfect and he’s added so much speech in the last year. Neurologically, he’s doing great,” Dr. Rossman said. “Infantile NPC kiddos tend do very poorly and do not show this level of progress.” 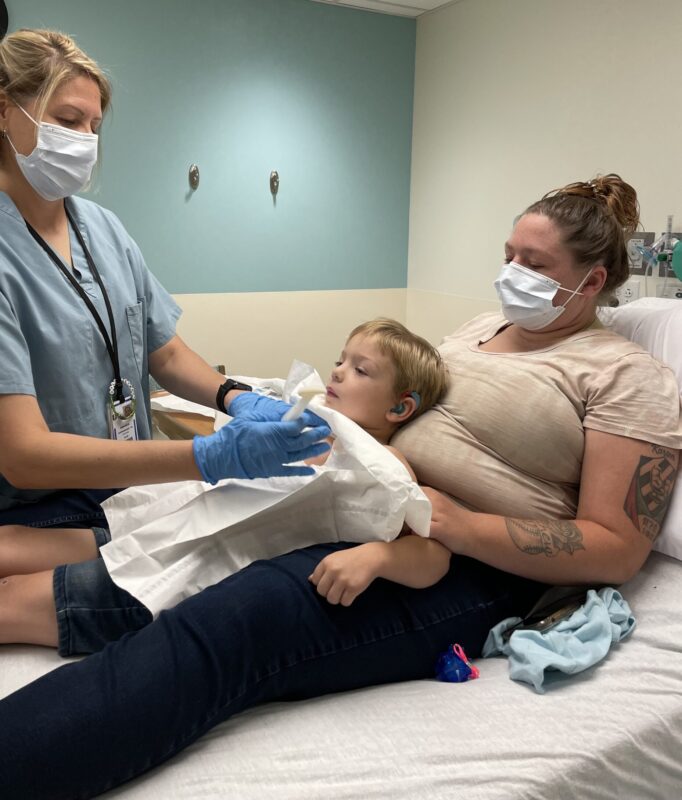 Karson’s parents, Ashley and Matt, of Louisville, brought a cake to the appointment and had additional reasons to celebrate.

After Karson was diagnosed with NPC at 19 months, their best hope was to get him into a clinical trial, led by Dr. Elizabeth Berry-Kravis, at Rush University Children’s Hospital in Chicago. The protocol for the potentially life-changing medicine, VTS-270 from Mallinckrodt Pharmaceuticals (now Mandos LLC), requires infusions every two weeks.

Ashley and Matt began their every two-week trek (7 hours of driving each way) to Chicago although they also took a few free medical-related flights. Obviously, this was difficult on the whole family with Matt needing to miss days of work, adjustment to the lives of Karson’s older siblings, MJ and Jaz, and mounting expenses associated with that much travel.

Ashley inquired about the chance of getting the treatment closer to home and begin calling local pediatric neurologists. Dr. Rossman took her call and said he would be willing to head up a study site at Akron Children’s if Dr. Berry-Kravis approved it. She gave him her blessing.

Dr. Rossman called Ashley to tell her he was approved to begin a clinical trial site at Akron Children’s and Karson would be the first patient enrolled in it.

“I cried,” said Ashley. “I was at my son’s baseball game and I cried.”

Akron Children’s officially became a site for the clinical trial in March, 2020 and now has two additional children enrolled in the study. After a year and half of the bi-weekly travel to Chicago, the Ross family could now get Karson’s infusions at Akron Children’s.

100th infusion in the books

Dr. Rossman performed the procedure by injecting the therapeutic into Karson’s spinal fluid while under sedation.

Karson’s is a road warrior when it comes to doctors and hospitals, showing little fear after what his mom estimates be more than 700 medical appointments in his short 5 years.

During his appointment, mutual affection between Karson and his sedation team was evident. Before his sedation, Karson jokingly putting his nurses into “time outs.” He listened to his doctors’ hearts with a stethoscope after they listened to his. And a few rounds of “Row, Row, Row your Boat” were sang in unison.

Ashley and Matt had no worries about Karson until his 9-month well-child visit and his pediatrician felt an enlarged spleen. Test after test followed. Cancer was ruled out and the rare hereditary disease, Niemann-Pick, became a concern. Ashley and Matt didn’t like what they were reading about it online – no cure and a shortened lifespan. The genetic mutation causes cholesterol and fats to build up inside a child’s liver, spleen and lungs, ultimately affecting the brain too.

The family’s fears became reality when the diagnosis was confirmed through Akron Children’s Genetics Center in late summer 2018.

Karson performed well on Dr. Rossman’s exam, pushing his legs back against his resistant, bending his knees, jumping high, and visually tracking the movements of a small toy. 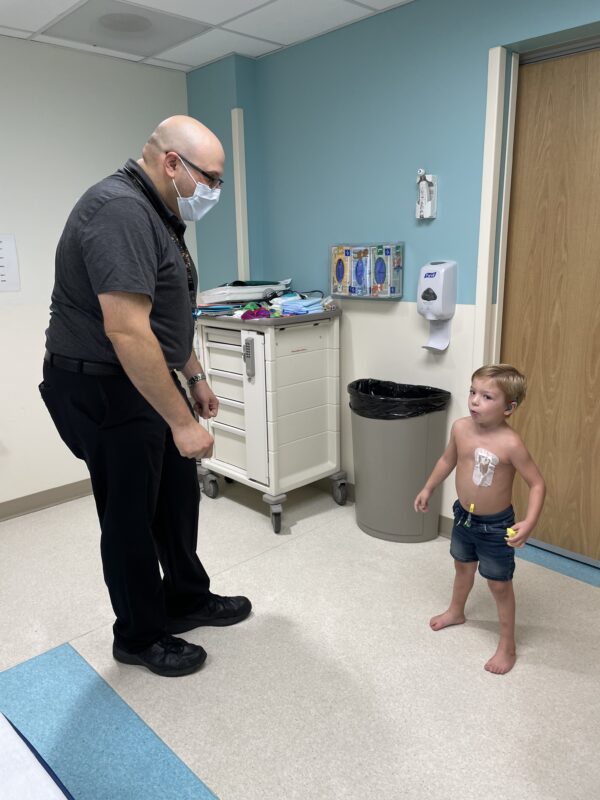 “As he’s getting older, he’s really getting so much better being able to do all of this,” said Dr. Rossman.

“We didn’t think he would do any of this 4 years ago,” said Ashley.

Karson has some other milestones coming up – a wish trip to Disney World and the start of kindergarten.

But first there is cake to eat with his doctors and nurses. 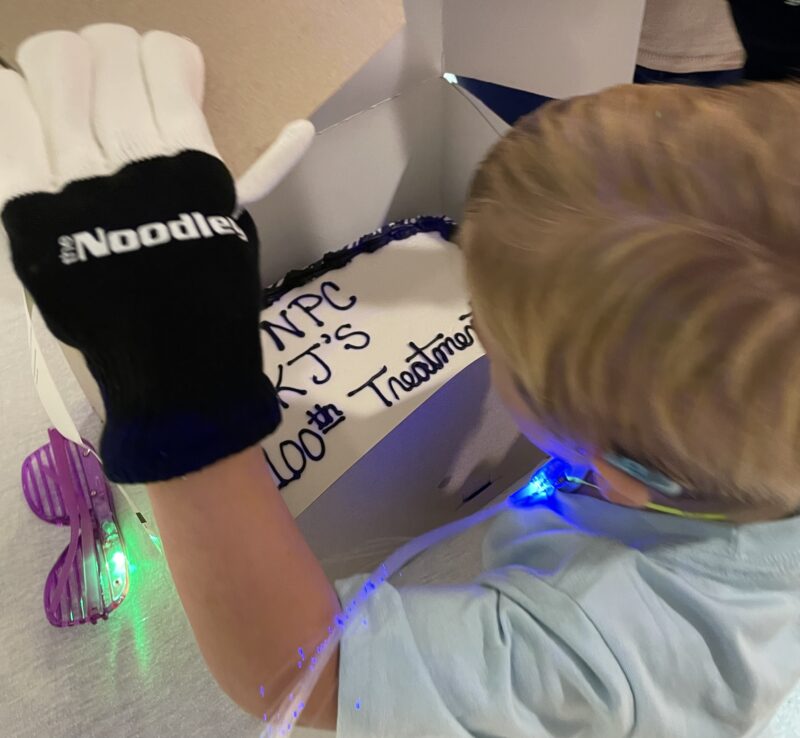 Karson peeks into the box to see the cake his family brought to the celebration.