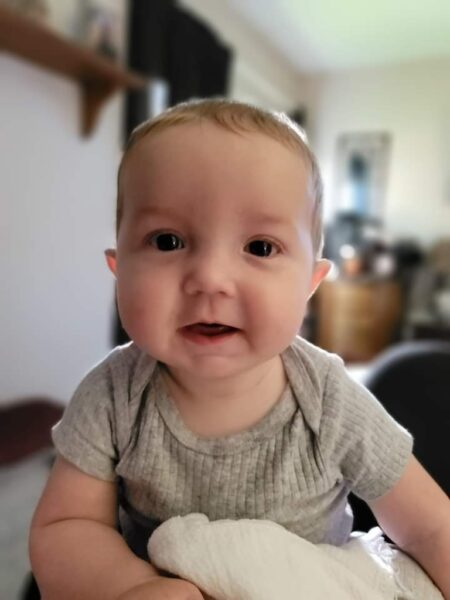 Seven-month-old Stephen Bodnar, who is being treated for cleft and craniofacial birth defects, regularly meets with his Akron Children’s pediatrician and care team at the new Children’s Amherst Health Center.

When Stephen Bodnar was born at Mercy Health – Lorain Hospital in November 2021, his mother, Megan Friend, assumed she would be bringing her newborn son home for Thanksgiving. But Stephen’s birth was unlike those Megan had with her older children.

“I delivered my older two without any problems,” Megan said. “When Stephen was born, he wasn’t breathing right. He wasn’t crying. The nurse stuck her finger in his mouth and said, ‘Oh, he has a cleft palate. There’s an opening in the roof of his mouth.’”

Mercy Lorain has a special care nursery onsite that is overseen by Children’s doctors. They recommended that Stephen be transferred to Akron Children’s neonatal intensive care (NICU) because of the severity of his craniofacial birth defects.

Dealing with a rare diagnosis
When he got to Children’s NICU, Stephen was diagnosed with Pierre Robin Sequence (PRS), a set of abnormalities of the head and face that consist of a smaller lower jaw and floppy tongue resulting in an obstruction of the airways. Because the lower jaw didn’t grow enough, the tongue is pushed to the roof of the mouth and back toward the throat. In this position, the tongue often blocks the roof of the mouth from forming properly, creating a cleft palate. Although cleft lip and cleft palate are the most common birth defect in the United States, PRS is quite rare.

Addison and David Bodnar are all smiles now that their baby brother Stephen is home in Lorain, Ohio.

For Megan and Stephen’s dad, Jeremy Bodnar, it was a shock, especially since Megan’s pregnancy had been uneventful.

“When we told our other kids, our youngest daughter, who is 4, couldn’t understand,” she said. “She kept asking how we could come home without a baby.”

Stephen’s family learned he would need several craniofacial surgeries to increase the length of his jaw bone and close his cleft palate. Otherwise, he would have trouble eating and breathing.

Stephen Bodnar underwent a procedure called mandibular distraction to lengthen his lower jaw, create more room for his tongue and open his airways so he can breathe normally.

The procedure that Dr. Murthy performed to lengthen Stephen’s lower jaw is called mandibular distraction. It involves cutting the bone and the surgical insertion of a small device into the jaw bone. Over 10 to 14 days, the pins are turned 1 or 2 millimeters a day to lengthen the lower jaw by 25 millimeters, or approximately 1 inch.

“When the distraction is finished, the front of the jaw is in its new position,” Dr. Murthy said. “This creates more room for the tongue and opens the airway so the child can breathe normally.”

The distractor is left in place until the space in the jaw bone regenerates and becomes solid, which takes about 6 weeks. The distractor is then removed through an outpatient procedure. As long as Stephen’s jaw grows along with the rest of his body, he may not need another distractor.

Until Stephen Bodnar undergoes cleft palate surgery, he is being fed through a gastrostomy tube, or g-tube, which is inserted into his belly. A feeding bag brings nutrition directly to his stomach.

Getting care close to home
After 2 ½ months in the NICU, Stephen was finally able to go home. Even though he could breathe normally, his cleft palate affected his ability to eat. To address this, a gastrostomy tube, or g-tube, was inserted into Stephen’s belly, bringing nutrition directly to his stomach. The g-tube will remain in place until he undergoes surgery in September to close his cleft palate, which should allow him to eat and eventually speak normally.

“It’s been wonderful going to Dr. Shekhawat and the new Children’s Amherst Health Center,” Megan said. “She’s so sweet to Stephen and he smiles at her all the time. They’re just amazing there. My other kids go to another practice but I plan to move them here, too. I like that they specialize in pediatrics.” 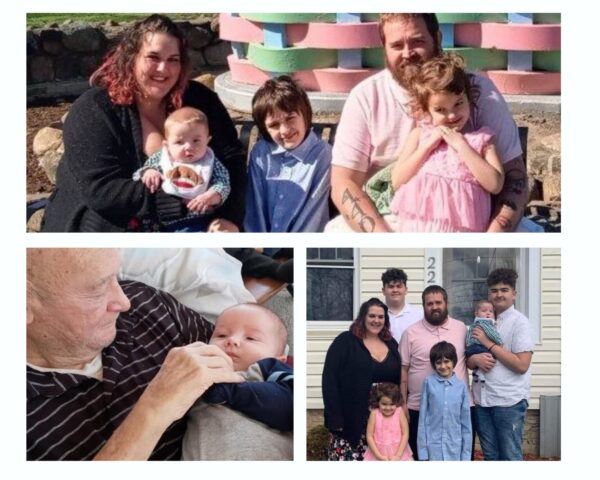 With Stephen Bodnar’s care now close to home, his family is able to enjoy spending holidays together.

For Megan’s family, Stephen’s care is now close to home, which has improved their quality of life. In fact, Stephen regularly meets with a craniofacial team of specialists in Amherst, who monitor issues that could affect him as he gets older. For instance, PRS and cleft palate might impact his speech, language, teeth development and hearing.

National Cleft and Craniofacial Awareness and Prevention Month is another way to raise awareness and improve understanding of cleft lip and palate and other head and face conditions, while addressing stigmas that children face.

“Our goal is to do what we can to restore what was taken away by birth defects and give kids a place to grow and thrive,” Dr. Murthy said.