a a a
skip to main content
akronchildrens.org
Home > Inside Blog > Vision > Nystagmus surgery gives Louisiana 11-year-old a new outlook 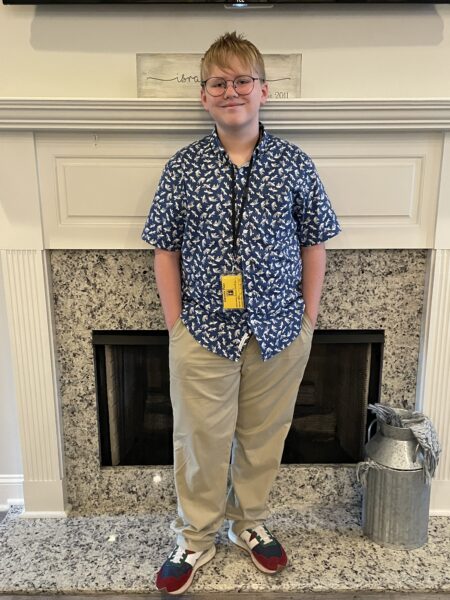 Reese recently completed 5th grade. In addition to being named to the honor roll, he also received the music award. Since his nystagmus surgery, he has taken up playing the tuba and piano.

When Reese Guidry was a barely a newborn his mom rushed him to the ER in a panic when his eyes kept rolling back in his head.

“It scared me,” said Laci, Reese’s mom. “I thought something was really wrong.”

Laci had been noticing that her firstborn had eye movements and patterns that didn’t seem typical. But it wasn’t until that hospital visit that she got an official diagnosis—nystagmus.

Nystagmus is a disorder characterized by constant, involuntary eye oscillations (movement) and causes impairment of many eye functions, such as visual acuity, contrast sensitivity, visual recognition time and motion and depth perception.

Nystagmus can run in families and Laci learned just a few years ago that she also has it (as does her other son).

“I have nystagmus but mine is very mild and not noticeable,” said Laci.

Reese was prescribed glasses at age 1 in hopes of helping him see a little better, but once he was enrolled in school it became apparent just how much Reese’s nystagmus was impacting his vision. For one, he couldn’t play most sports because his coordination and fine motor skills are affected by his vision.

When Reese entered 1st grade his teachers recommended assisted technology and braille (Reese is not considered legally blind). While they decided to forgo braille, Reese uses a large iPad at his desk that has a camera attached to it. He also uses special paper for writing assignments. 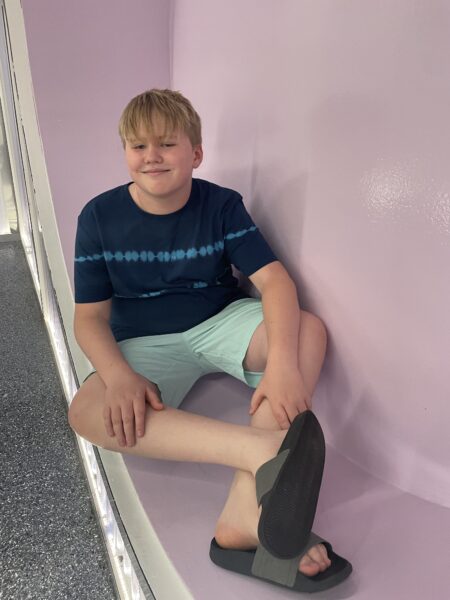 Reese suffers fewer headaches and less visual fatigue since having nystagmus surgery with Dr. Hertle in 2021.

“I can point the camera at the board the teacher is using and enlarge it so I can see it better,” he said.

When his nystagmus started to lead to eye fatigue and increased headaches, Laci sought the advice of a Facebook nystagmus group where one person’s name kept repeatedly popping up—Dr. Richard Hertle, director of pediatric ophthalmology at Akron Children’s and a world-renowned nystagmus expert.

“Dr. Hertle came up as one of the few doctors in the country who researches and specializes in nystagmus,” said Laci. “I figured if we are going to seek care, why not go to the best?”

After a 3-month wait, Laci and Reese traveled from Youngsville, LA to Akron to meet with Dr. Hertle.

“The way Dr. Hertle works is you have your initial appointment and extensive testing with him, and he determines if you are a surgical candidate,” said Laci. “If you are, you are scheduled for surgery the next day.” In 2021, Reese’s family traveled 17 hours by car from Louisiana to see Dr. Richard Hertle because he is one of the few physicians in the country who specializes in nystagmus.

Thankfully, Reese was a candidate for the 1-hour surgery that helps improve the eye wiggle and head posturing nystagmus patients tend to adopt to control their wandering gaze. Technically there is no cure for nystagmus, but surgery can improve visual functions like letter vision (acuity), contrast sensitivity, motion detection, depth perception, visual recognition time and gaze dependent vision.

“Now one year post-surgery, Reese doesn’t complain of headaches or visual fatigue like he did a year ago,” said Laci. “Although he hasn’t seen significant improvements in his visual acuity, the fact that he doesn’t need to go to the nurse frequently for ibuprofen for headaches has been a win.”

With vision not fully developed until around age 15, Laci still has hopes Reese’s vision will improve enough to make him a candidate for a restricted driver’s license down the road. Currently age 11, Reese recently completed 5th grade with high marks and is looking forward to going to middle school next year where he will play the tuba in band. 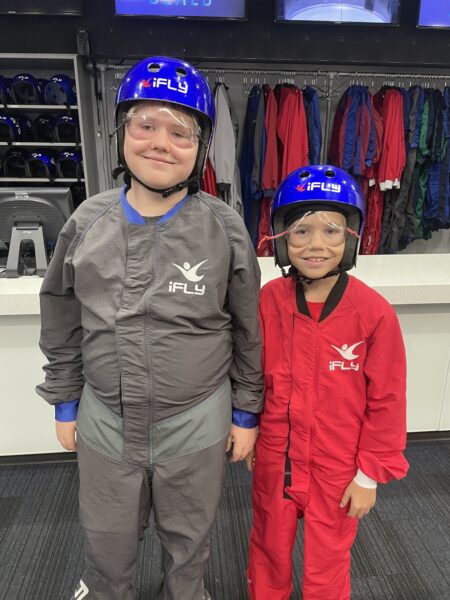 Reese and his brother, Ryker, prepare to indoor skydive. His mom says he isn’t afraid of anything!

This summer he enjoying camp at the Louisiana School for the Visually Impaired, where the focus is on fun and learning life skills.

“Reese is learning how to do his own laundry,” Laci said. “All that matters is that he’s having fun.”

Laci remains grateful for the quality of life improvements she has witnessed as a result of Reese’s surgery.

“Dr. Hertle gave us hope when no one else could,” she said. “Reese is a happy and healthy 11-year-old which is all that I could ask for.”

For more information on nystagmus and the services available at the Akron Children’s Hospital Vision Center, click here.