a a a
skip to main content
akronchildrens.org
Home > Inside Blog > Patient Experience > Meet Our Patients > For these running buddies, the benefits add up to much more than the finish line euphoria

If you see Sarah Betz and Kyle Nottingham while out running, give them a shout-out or a high-five. Kyle loves the attention and Sarah has earned the kudos.

Sarah, a close friend to Kyle’s mother, Jenny, and a caregiver to Kyle, has logged more than 520 miles running so far this year, including 150 miles as she has pushed Kyle in a specialized jogging chair.

It all started with a doctor’s appointment, where Sarah was diagnosed with high blood pressure. She began eating healthier and walking and hiking trails in Stark County. That lead to running and joining up with running groups, including other Akron Children’s patient families who compete in two-person push races. 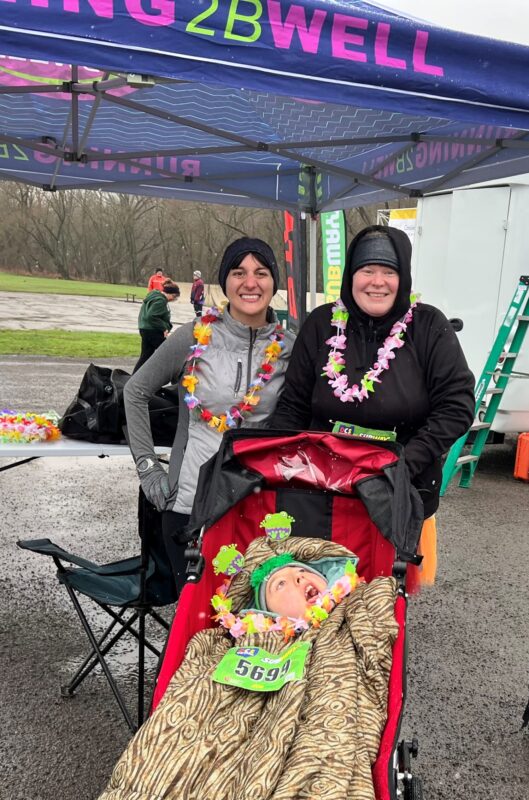 Friend Allison Terlacher gifted Sarah a racing chair so she could run with Kyle. She has become one of the duo’s biggest cheerleaders.

Sarah, 33, and the Nottingham family got an initial foray into the excitement of the running community in 2019 when Kyle was one of Akron Children’s Hospital’s “hero patients” featured along the route of the Akron Marathon. Kyle cheered on thousands of runners on as they passed his hero zone, and the affection was mutual.

Sarah, an intervention specialist with Southeast Local Schools in Portage County, first began taking Kyle on runs, pushing him in his wheelchair. Kyle weighs about 80 pounds and the wheelchair was another 75. It wasn’t easy for Sarah but then Sarah’s friend, Allison Terlacher, gifted them a jogging chair especially designed for a child with special needs. 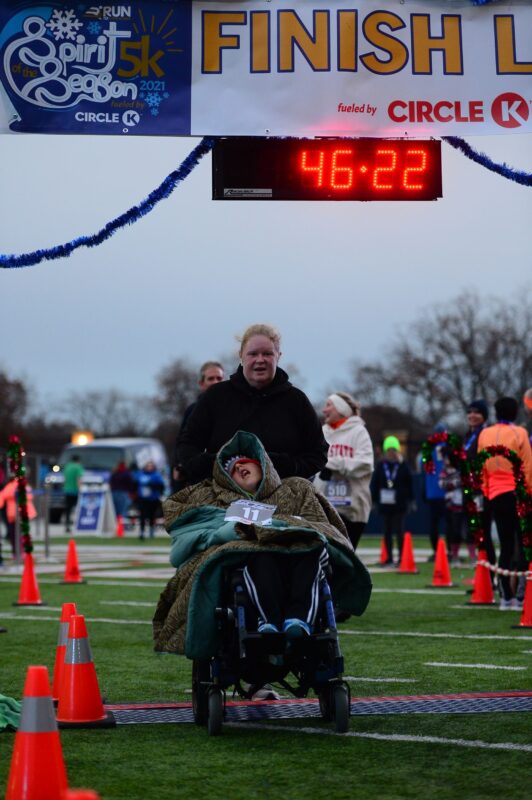 Super Valentine’s Day 5k in February was Kyle’s first run after a hospitalization for a serious illness.

“Kyle loves it,” says Sarah. “I use an interval app on my phone – 45 seconds running; 45 seconds walking. But once the warm-up is done, I say, ‘We’re going to run, dude. And he gets the biggest smile on his face.”

Kyle loves the cheers from passersby, too.

“It’s so funny,” said Sarah, “because as we pass people, they often yell, ‘Good job.’ And I reply, ‘Don’t cheer for him. I am doing all the work here and he starts laughing. He also laughs when I say, “Hey Kyle, it’s your turn to push Sarah.”

Now they are training for the first race in the Akron Marathon Race Series, the National Interstate 8K on June 25.

Sarah and Kyle do most of their training runs on the Towpath Trail, the Sippo Lake Trail and other Stark Parks trails. Kyle, 14, loves the sights and sounds of nature.

“Honestly, he just loves getting out and being outside,” said Sarah. 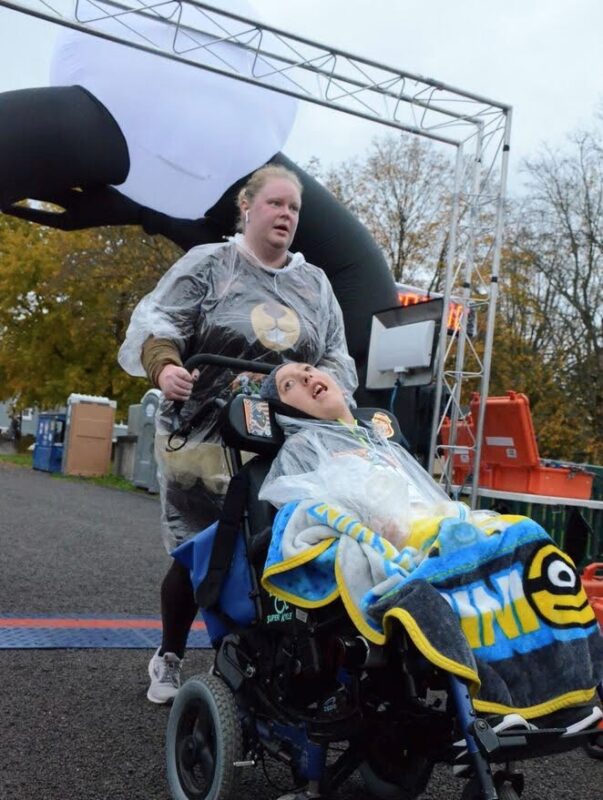 The Haunted Forest 5k around Halloween in 2021 was Sarah and Kyle’s first 5k together.

The results speak for themselves. Sarah has lowered her blood pressure and no longer needs medication. She has eliminated headaches and dropped at least 50 pounds.

But, according to Sarah, the more intangible benefits are the loud cheers they get at the finish line and the sense of accomplishment they get when finishing races in the humid heat of summer or the blustery cold of winter.

While Kyle loves the sounds on the trails or a competitive road race with Sarah, his favorite sound – crazy as it seems – is that of an ambulance siren. Jenny thinks it’s because he associates it with his many emergency trips to Akron Children’s Hospital.

Kyle is so fond of his caregivers at Akron Children’s that instead of calling it “Akron Children’s,” the family refers to the hospital as, “Akron Disney.”

According to Jenny, Kyle’s fondness for the hospital stems from the royal treatment he receives on his frequent visits.

“Every time, I tell him we’re going to Children’s, he squeals with excitement,” she said. “I think it’s because everyone is so nice to him. He gets stickers and stuffed animals and loves the ball machine and the dogs.”

Kyle had a healthy, typical start to life but starting missing milestones around six months of age. A brain MRI and genetics test led to the diagnosis of a rare neurological disorder called leukodystrophy hypomyelinating 6.

While non-verbal and physically limited, Kyle is cognitively very aware of everything happening around him.

He’s had more surgeries and hospitalizations to count and, this past January, was as ill as he has ever been with a bacterial pneumonia called pseudomonas. Still, he was back to running with Sarah by February.

After the June 25 8K, he will be heading into another major orthopedic surgery.

But, until then, Kyle and Sarah will be flying high on the trails, inspiring all at the National Interstate 8K and enjoying more well-deserved finish line cheers. 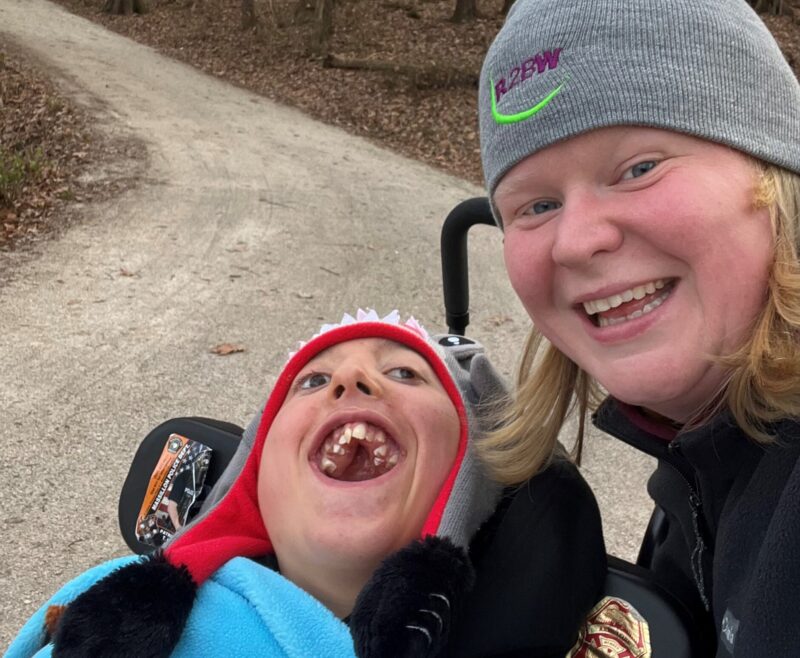 Sarah & Kyle on a training run on Sippo Lake Trail. Sarah appreciates the accessibility of this and other Stark County park trails.