a a a
skip to main content
akronchildrens.org
Home > Inside Blog > Patient Stories > Helping hearts in Haiti for 10 years 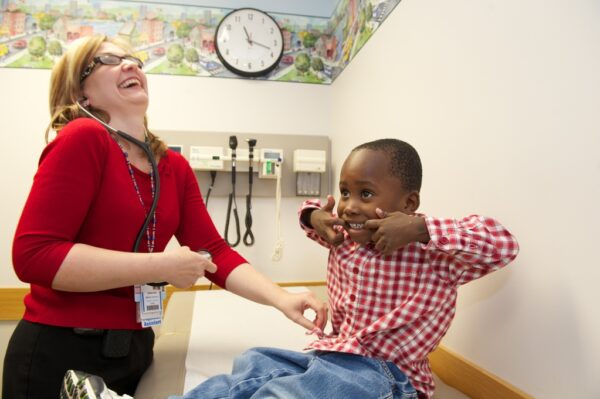 Kids will be kids. Kristen Breedlove, PA-C lets out a big laugh while her patient from Haiti gives a big smile during his post-surgery exam 10 years ago.

For 10 years, Akron Children’s Hospital has been supporting Haitian pediatric heart patients through a partnership with St. Damien Pediatric Hospital, and the milestones achieved along the way are nothing short of life-changing.

How it all started

After a devastating 7.0-magnitude earthquake ripped through Haiti in 2010, Akron Children’s staff visited the island country to care for those affected and, in the midst of the ruble, found an opportunity to do more.

“During our trip, we learned we could bring Haitian children to Akron to do heart surgery. All we needed to do was convince the hospital to support it,” remembers Dr. Jeffrey Kempf, retired ER physician at Akron Children’s. “It didn’t take much convincing because Mr. Considine was that kind of leader. He fully supported the idea and said we could bring 2 kids over, so we got to work.”

By 2012, Drs. Kempf, and John Pope, current director of pediatric global health at Akron Children’s, along with original team members Drs. John Clark, Ellen Kempf and J.R. Bockoven, made their first organized trip to St. Damien. During their stay, they provide care to dozens of pediatric patients and brought 2 kids back to Akron Children’s for life-saving surgery. 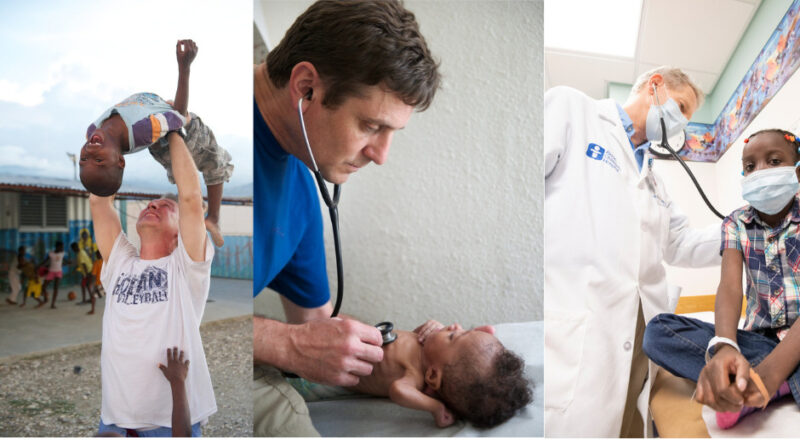 For 10 years, Akron Children’s staff have touched the lives of many Haitian patients, and the patients have left a lasting impression on them, too. Pictured: Dr. Jeffrey Kempf (left), Dr. John Clark (middle) and Greg Padrutt, PA-C (right).

In the years that followed, the Akron Children’s team grew and so did its impact. Twice a year, Akron Children’s sent teams of specialists, including nurses, radiologists, cardiologists and surgeons, to Haiti where they could care for more kids with a wide range of conditions – from infections and malnutrition to sepsis and heart. The team bonded with families and staff, coordinated supply donations and trained Haitian medical workers on how to care for patients.

“We know education and training is key to building capacity in Haiti so they can care for more kids on their own,” said Dr. Pope. “The ultimate goal is to create a self-sustaining program in Haiti, but it will take more time and resources to get there.”

In support, the Akron Children’s team has helped St. Damien establish programs for cardiac care and sickle cell anemia care, as well as form a pediatric residency exchange and surgery team visit. Additionally, medical teams from Akron Children’s and St. Damien have made countless trips back and forth to the U.S. and Haiti for education, which has helped foster relationships among staff and passion for the partnership. As a result of the ongoing education, Akron Children’s staff was able to train St. Damien’s first, and the country’s only, pediatric cardiologist, which is a huge win for kids health in Haiti. 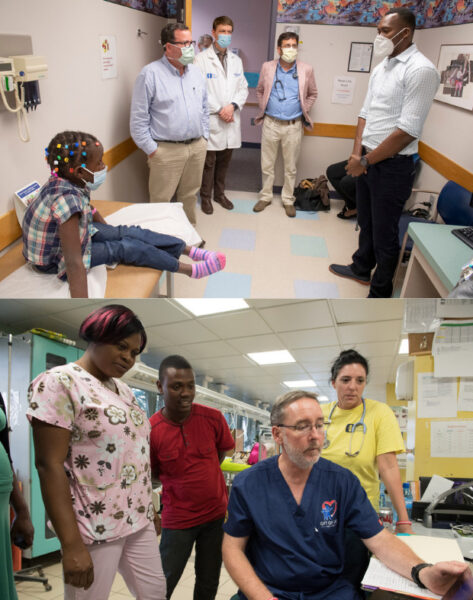 Education – in Akron or in Haiti – has played a key role in the partnership between Akron Children’s and St. Damien.

Beyond the work at St. Damien, Akron Children’s partnered with the Haiti Cardiac Alliance and Gift of Life Northeast Ohio to match Haitian children with surgery providers across the globe. The process was highlighted in the documentary film, Open Hearts, that gives a compelling look at the agonizing decision-making involved in bringing children to Akron Children’s for surgery.

A decade later, and in spite of natural disasters, a pandemic and political unrest, the hospital’s life-saving work continues. In all, 14 children have made the trip to Akron Children’s for care and two more are slated this year.

One such patient, Darensky, came to Akron Children’s for cardiac care 8 years ago and was back in Akron last month for a follow-up. His story is a reminder of how the hospital’s work in Haiti not only save lives, but also touches the lives of so many.

“We were only supposed to fix his heart, but his surgery revealed several other issues that would impact his life so we had to ask Mr. Considine what we were allowed to do,” remembers Dr. Kempf. “He said, ‘He’s our child now; he belongs to us so we have an obligation to do whatever we can to help him and we will.’  …So we did.”

Darensky received 4 surgeries to save his life. Today he is a healthy 10-year-old, thankful for the gift he was given.

“These kids really become a part of the Akron Children’s fabric and touch the lives of people in our hospital and in the Akron community,” said Dr. Kempf. “We should be proud of the work that we’ve done and strive to ensure that every child is provided the opportunity to grow and reach his or her full potential. There is more work to do, but we can’t do it alone.”

Learn more about the Global Health team’s bi-directional partnership with St. Damien Pediatric Hospital and how you can help support this program by contacting Tim DuFore, senior director of development operations, at tdufore@akronchildrens.org or 330-810-5826.