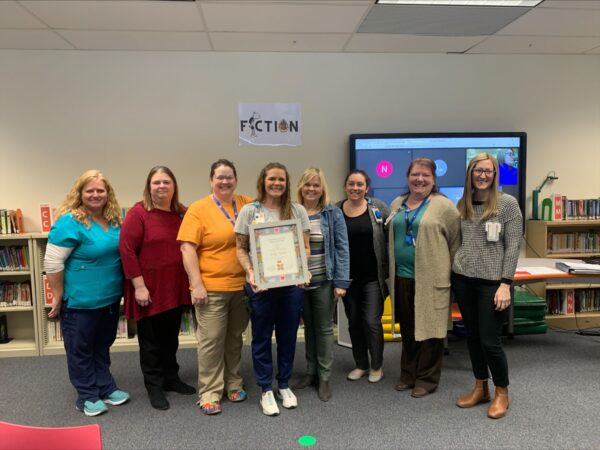 The annual award recognizes outstanding school health professionals throughout the state. Fort Island Primary School staff, parents and students surprised Kelly with the award at a celebration on March 14. The Ohio PTA will also recognize Kelly’s achievement at its annual convention in April.

“[Kelly] really deserves this award,” said Jennifer Henderson, MSN-Ed, RN, NCSN, Akron Children’s district nurse for Copley-Fairlawn City Schools. “She truly goes above and beyond for the students and staff.” 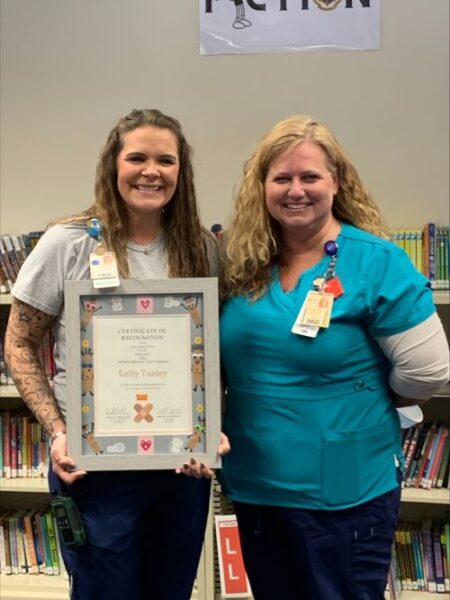 Administrators, teachers and PTA parents nominated Kelly for the award. Fort Island Primary School PTA President Shelley Melchior described Kelly as an integral part of the school, and said she continuously gives more to her work than what’s required.

“She does more than she needs to without even thinking about it,” said Shelley. “It’s the selfless nature of being a health aide – you want to help people. But she takes it beyond the physical wellbeing of people. She wants to help everyone, however she can, during the school day.”

As a school nurse aide, Kelly manages the medical needs of more than 360 students at the school, including tracking immunizations, administering medications, and triaging illnesses or accidents.

“She has dealt with minor injuries and some that are more significant,” said Jennifer. “Whenever there’s a situation, she remains calm and handles it. She keeps others calm. She’s just really great at her job, and you can tell she loves it. She puts everything she has into her role.”

Beyond her clinical duties, Kelly often greets parents and kids in the carpool lane, before they enter the building. Jennifer said students and staff alike appreciate her friendly, outgoing personality.

“The kids love her,” said Jennifer. “She’s very approachable. We have students who come to the clinic because they just want to visit her. That speaks volumes about her personality and her interactions with the kids.”